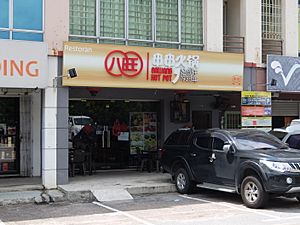 A hot pot restaurant in Malaysia.

Hot pot is a popular food throughout China, and its popularity is increasing in other countries. Hot pot restaurants can be found in many places in China. Hot pot is a pot of boiling water, often with chili oil inside, where people put in whatever food they like to boil. Food that is cooked often includes thin slices of meat, starches, vegetables, mushrooms, and noodles. Chengdu and Chongqing hot pot are especially well-known throughout China and worldwide. In Japanese, the dish is called shabu-shabu.

All content from Kiddle encyclopedia articles (including the article images and facts) can be freely used under Attribution-ShareAlike license, unless stated otherwise. Cite this article:
Hot pot Facts for Kids. Kiddle Encyclopedia.