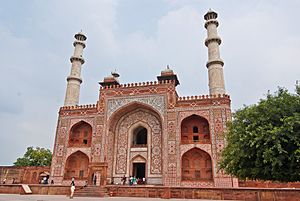 Akbar's Tomb of external entrance from the road, built to imitate the Buland Darwaza at Fatehpur Sikri, the city, Akbar founded

 Akbar's tomb is the tomb of the third Mughal emperor "Akbar the great's" Tomb known as mousoleum is situated in sikhandar in Delhi, Agra as a main piece of monument.

All content from Kiddle encyclopedia articles (including the article images and facts) can be freely used under Attribution-ShareAlike license, unless stated otherwise. Cite this article:
Akbar's tomb Facts for Kids. Kiddle Encyclopedia.