The diamond may have been mined from Kollur Mine, a series of 4-metre (13 ft) deep gravel-clay pits on the banks of Krishna River in the Golconda (present-day ), India. It is impossible to know exactly when or where it was found and there are many theories that exist as to its original owner.

Koh-i-Noor is Hindi–Urdu for "Mountain of Light"; it has been known by this name since the 18th century. It changed hands between various factions in south and west Asia, until being ceded to Queen Victoria after the British annexation of the Punjab in 1849.

Originally, the stone was of a similar cut to other Mughal-era diamonds, like the Darya-i-Noor, which are now in the Iranian Crown Jewels. Members of the public were given a chance to see the Koh-i-Noor when The Great Exhibition was staged at Hyde Park, London, in 1851. It represented the might of the British Empire and took pride of place in the eastern part of the central gallery, its mysterious past and advertised value of £1–2 million drew large crowds.

At first, the stone was put inside a gilded birdcage, but after complaints about its dull appearance, the Koh-i-Noor was moved to a case with black velvet and gas lamps in the hope that it would sparkle better. Despite this, the flawed and asymmetrical diamond still failed to please viewers. Prince Albert, husband of Queen Victoria, ordered it to be re-cut as an oval brilliant by Coster Diamonds. By modern standards, the culet is unusually broad, giving the impression of a black hole when the stone is viewed head-on; it is nevertheless regarded by gemmologists as "full of life".

Because its history involves a great deal of fighting between men, the Koh-i-Noor acquired a reputation within the British royal family for bringing bad luck to any man who wears it. Since arriving in the UK, it has only been worn by female members of the family. 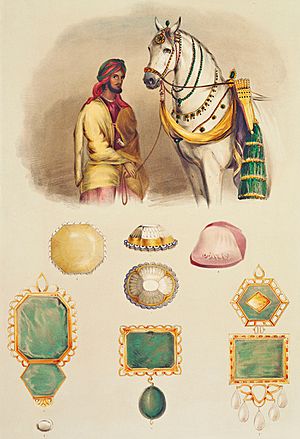 The Koh-i-Noor was formally presented to Queen Victoria on 3 July 1850 at Buckingham Palace by the deputy chairman of the East India Company. The date had been chosen to coincide with the Company's 250th anniversary. Victoria wore the stone in a brooch and a circlet. After she died in 1901, it was set in the Crown of Queen Alexandra, wife of Edward VII. It was transferred to the Crown of Queen Mary in 1911, and finally to the crown of Queen Elizabeth in 1937 for her coronation as Queen consort. When The Queen Mother died in 2002, the crown was placed on top of her coffin for the lying-in-state and funeral.

All these crowns are on display in the Jewel House at the Tower of London, where it is seen by millions of visitors each year.With crystal replicas of the diamond set in the older crowns.The original bracelet given to Queen Victoria can also be seen there. A glass model of the Koh-i-Noor shows visitors how it looked when it was brought to the United Kingdom. Replicas of the diamond in this and its re-cut forms can also be seen in the 'Vault' exhibit at the Natural History Museum in London.

The governments of India and Pakistan have both claimed ownership of the Koh-i-Noor and demanded its return since the two countries gained independence from the UK in 1947. The British government insists the gem was obtained legally under the terms of the Last Treaty of Lahore and has rejected the claims.

All content from Kiddle encyclopedia articles (including the article images and facts) can be freely used under Attribution-ShareAlike license, unless stated otherwise. Cite this article:
Koh-i-Noor Facts for Kids. Kiddle Encyclopedia.