Bairam Khan (c. 18 January 1501 – c. 31 January 1561) was an important military commander, and later commander-in-chief of the Mughal army, a powerful statesman and regent at the court of the Mughal Emperors, Humayun and Akbar. He was also the guardian, chief mentor, adviser, teacher and the most trusted ally of Akbar. Humayun honored him as Khan-i-Khanan, which means "King of Kings". Bairam was originally called Bairam "Beg", but later became honored as 'Kha' or Khan. Bairam Khan was an aggressive general who was determined to restore Mughal authority in India. Two divans are attributed to him, one in Persian and the other in Chagatai.

Bairam entered Babur's service at the age of 16 and played an active role in the early Mughal conquests of India. Bairam Khan later contributed greatly to the establishment of the Mughal empire under Humayun when he was entrusted with the position of muhardar (keeper of the seals) and took part in military campaigns in Benares, Bengal and Gujarat. He accompanied Humayun during his exile in Persia and helped conquer Kandahar before serving as its governor for nine years. In 1556, he played a leading role as a commander in Humayun's reconquest of Hindustan.

Following Humayun's death in 1556, Bairam Khan was appointed regent over the young monarch Akbar. As regent, he consolidated Mughal authority in northern India and most notably led the Mughal forces at the Second Battle of Panipat, which was fought between Akbar and Hemu in November 1556.

Bairam Khan was a Shia Muslim and was disliked by some of the Sunni Turkic nobles. Although a Shia, he attended Friday services in the mosque of a noted Sufi and was also responsible for Shah Gada, the son of Sikandar Lodi's court poet Jamali Kamboh, becoming sadr-as-sudr in the Mughal Empire after Humayun's return to Delhi in 1555.

Soon after Babar's death, his successor, Humayun, was supplemented by Sher Shah in 1540 A.D., later followed by Islam Shah in 1545 A.D. During the reign of the latter, a battle was fought and lost by the Emperor's troops at Firozpur Jhirka in Mewat, on which, however, Islam Shah did not lose his hold. Adil Shah, the third of the Pathan interlopers, who succeeded in A.D. 1552, had to contend for the Empire with the returned Humayun.

In these struggles for the restoration of Babar's dynasty Khanzadas apparently do not figure at all. Humayun seems to have conciliated them by marrying the elder daughter of Jamal Khan, the nephew of Babar's opponent Hasan Khan Mewati, and having his minister, Bairam Khan, marry Jamal's younger daughter. Bairam's other wife was Salima Sultan Begum, who married Akbar after his death. 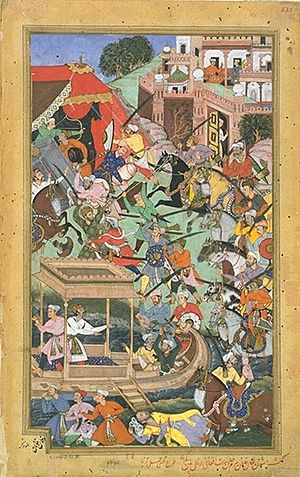 Bairam Khan is assassinated by an Afghan at Patan, 1561, Akbarnama

Due to a difference in opinion with Bairam Khan, Akbar told him that he could either retire and stay in the palace or go on the hajj pilgrimage to Mecca. On his way, his opponents goaded him to rebel, but he was defeated in the Punjab. Akbar gave him the option of staying in the court as an advisor or continuing his pilgrimage. Bairam chose the latter. While traveling through Gujarat he was killed. It came about when Bairam Khan was at Sahastralinga Tank, a religious site near Anhilwad Patan, and was recognised by Lohani Pashtun, an associate of Haji Khan Mewati. Upon learning of this, Haji Khan planned his attack and killed Bairam Khan in order to take revenge for Emperor Hemu's death. Haji Khan Mewati was from Alwar and he had been a general of Hemu, and had been staying at Patan, after his defeat by Akbar's forces and the capture of Alwar Sarkar in 1559.

Bairam Khan died on 31 January 1561. However, his son and wife were allowed to go free and were sent to Agra. Bairam Khan's wife, who was also the cousin of Akbar, married Akbar after Bairam Khan's death. Bairam's son, Abdul Rahim Khan-I-Khana, became an important part of Akbar's administration and was one of the nav-ratans (nine gems) of Akbar's court.

All content from Kiddle encyclopedia articles (including the article images and facts) can be freely used under Attribution-ShareAlike license, unless stated otherwise. Cite this article:
Bairam Khan Facts for Kids. Kiddle Encyclopedia.