David Albert Charles Armstrong-Jones, 2nd Earl of Snowdon (born 3 November 1961), styled as Viscount Linley until 2017 and known professionally as David Linley, is an English furniture maker and a former chairman of the auction house Christie's UK. The son of Princess Margaret and Antony Armstrong-Jones, 1st Earl of Snowdon, he is therefore a nephew of Queen Elizabeth II, and a grandson of King George VI and Queen Elizabeth The Queen Mother. As of May 2019[update], he is 21st in the line of succession to the British throne, where he is the first person who is not a direct descendant of the Queen. At the time of his birth in 1961, he was fifth.

At the age of five, Snowdon started lessons in the Buckingham Palace schoolroom with his cousin Prince Andrew. He went to several independent schools: first, to Gibbs Pre-Preparatory School in Kensington in London, followed by the pre-preparatory section of Ashdown House School, East Sussex, then on to Millbrook House School, near Abingdon, in Oxfordshire, and finally to Bedales School, where he developed a passion for arts and crafts. From 1980 to 1982 he studied at Parnham House in the small town of Beaminster in Dorset, for craftsmen in wood. 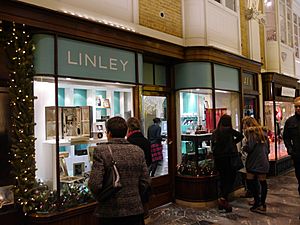 Snowdon opened a workshop in Dorking, where he designed and made furniture for three years before setting up his own company, David Linley Furniture Limited (now known as Linley), where he makes bespoke furniture, upholstery, and interior design products known for their neoclassical appearance and use of inlaid woods. He has written numerous books and lectured around the world. His work is sold in retail stores in Belgravia, Harrods and overseas including the Bespoke Collection. He borrowed from his company by causing it to make loans, acquiring some £3 million in debts, a situation eventually resolved by sale of controlling shares for £4 million in 2012. He thereby lost control of the company.

In the past, Snowdon dabbled in the restaurant business, with his friend and second cousin Patrick Lichfield to establish a restaurant called Deals in Chelsea, London. According to Princess Margaret's biographer, Theo Aronson, Snowdon had a flair for the networking aspect of business and was successful in getting people to come through the doors.

Candidacy for the House of Lords

Snowdon's father, the first Earl, was originally a member of the House of Lords, by virtue of his being granted a peerage. When the House of Lords was reformed in 1999 and most hereditary peers lost their seats, he was given a life peerage. An offer of a life peerage was made to all hereditary peers of the first creation (those for whom a peerage was originally created, as opposed to those who inherited a peerage from an ancestor) at that time. The second Earl, accordingly, did not inherit a place in the House of Lords along with his title.

However, in 2018 Snowdon became a candidate in a by-election to fill a vacancy among the ranks of the crossbench peers. Only hereditary peers are eligible to stand in this election, and only the 31 currently sitting in the Lords as crossbenchers are eligible to vote. Unlike other candidates, Snowdon did not write a statement accompanying his announcement of candidacy. He later withdrew from consideration for the seat. Reportedly, his candidacy had "raised eyebrows" due to his relation to the royal family. 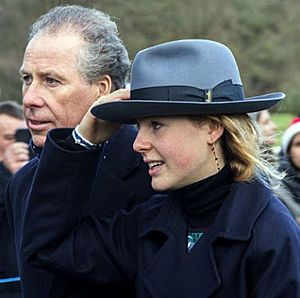 Pictured with his daughter in 2017

Snowdon and his wife have two children:

From 2000 until 2002, Snowdon, his wife and son lived at Kensington Palace with his mother, Princess Margaret, in her declining years. On 8 April 2002, Snowdon, along with the Prince of Wales, the Duke of York, and the Earl of Wessex, "stood guard" at the lying-in-state of their grandmother, Queen Elizabeth The Queen Mother. This Vigil of the Princes had taken place only once before, during the lying-in-state of King George V in 1936.

In October/November 2007, rumours circulated on the internet suggesting that a member of the British royal family was the victim of blackmail. The first confirmation that the royal in the extortion attempt was indeed Viscount Linley, as Snowdon was known at the time, came from the journalist Nicholas Davies. Strachan and McGuigan were sentenced to five years in prison.

In 2011, Snowdon's daughter, Margarita Armstrong-Jones, was a bridesmaid at the wedding of Prince William and Catherine Middleton. In 2012, Snowdon's son, now styled by courtesy as Viscount Linley, was appointed by the Queen as a Page of Honour.

The Snowdons have three homes: a flat in Chelsea, London; a cottage on the Daylesford estate in Gloucestershire; and the Chateau d'Autet in the Luberon, Provence.

Snowdon's father, the 1st Earl of Snowdon, died on 13 January 2017 and the younger Snowdon inherited his titles, thus becoming the 2nd Earl of Snowdon and Viscount Linley.

In February 2020, Snowdon and his wife separated and a spokesperson confirmed they will be getting a divorce.

All content from Kiddle encyclopedia articles (including the article images and facts) can be freely used under Attribution-ShareAlike license, unless stated otherwise. Cite this article:
David Armstrong-Jones, 2nd Earl of Snowdon Facts for Kids. Kiddle Encyclopedia.