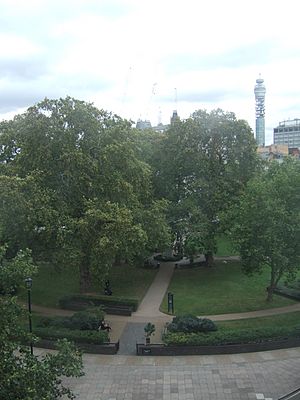 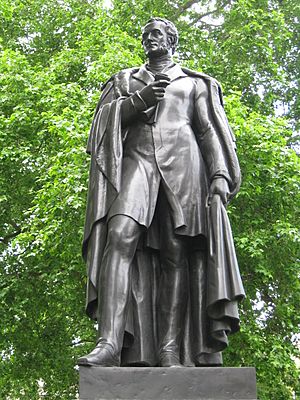 Statue of Lord George Bentinck on the south side of Cavendish Square by Thomas Campbell.

Cavendish Square is a public square in the West End of London, very close to Oxford Circus, where the two main shopping thoroughfares of Oxford Street and Regent Street meet. It is located at the eastern end of Wigmore Street, which connects it to Portman Square, part of the Portman Estate, to its west. One side is faced by the rear of the flagship John Lewis shop. 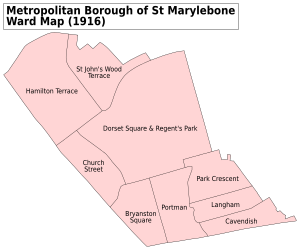 A map showing the Cavendish ward of St Marylebone Metropolitan Borough as it appeared in 1916.

It was first laid out for the 2nd Earl of Oxford by architect John Prince, beginning in 1717 as the first development on the Earl's London estate. It was named after the Earl's wife Henrietta Cavendish-Holles, but the bursting of the South Sea Bubble delayed further work. It included various nobles' London residences, including the Duke of Portland, the Duke of Chandos (though his house on the square was never completed), Princess Amelia (in which house she died), and the Lane Baronets.

A blue plaque unveiled in 1951 commemorates H.H. Asquith, the Liberal Prime Minister of the United Kingdom from 1908 to 1916, having owned and lived at 20 Cavendish Square. Another of the buildings on the square carries a blue plaque indicating that it was once the residence of Quintin Hogg, the founder of what is now the University of Westminster; the flagship building of the university backs on to Hogg's house. The Royal College of Nursing has its headquarters in Cavendish Square, and the West London Synagogue is also sited there. Near to Harley Street, the square is also noted as a site for medical practices such as those of James Paget. The artist Robert William Sievier lived on the square, and David Williams, founder of the Royal Literary Fund, ran a chapel there. Frances Fanshawe, wife of Rev. Dr. Abraham Blackborne, grandson of Richard Levett, Lord Mayor of London, died at her home on Margaret Street, Cavendish Square, in 1795 and was buried at Kew.

The bronze statue on the south side of the square (facing John Lewis) is of William George Frederick Cavendish Bentinck (1802–1848). Known simply as Lord George Bentinck, he was MP for King's Lynn, Norfolk. The statue is by Thomas Campbell and was erected in 1848.

Underground at Cavendish Square, there is a car park with spaces for 521 cars and 83 motorcycles. Operated by Q-Park, it is designated their car park for Oxford Street. The car park is unusual as it has the form of a double helix (a twin-start screw). Cars are parked on either side of a continuously descending right-hand helix with one-way traffic. At the bottom, cars are directed diametrically across the car-park, to find a left-hand ascending helix, also one-way with parking on either side, sandwiched between the turns of the descending helix. Since there is no pedestrian lift (as of 2013), parking near the beginning of the descending helix, or near the end of the ascending one, is preferred. But since it is impossible to see in advance whether there are any spaces remaining in the top coils of the ascending helix, the decision of how far to proceed is usually sub-optimal.

In the 19th century, numbers 11, 12 and 13 had become a convent with a tunnel underneath the road. Following bomb damage in the Second World War the sisters commissioned the architect Louis Osman to restore the houses and create a bridge between the two. He approached Jacob Epstein for a Virgin and Child that would 'levitate' above the arch and specified that it should be cast in lead which was plentiful from the bombed roofs. However, Osman had failed to inform the mother superior that the sculptor was Jewish. However, the Arts Council congratulated her on her "innovative choice of artist". Epstein's work was unveiled in 1953.

All content from Kiddle encyclopedia articles (including the article images and facts) can be freely used under Attribution-ShareAlike license, unless stated otherwise. Cite this article:
Cavendish Square Facts for Kids. Kiddle Encyclopedia.