The London Pavilion is a building on the corner of Shaftesbury Avenue and Coventry Street on the north-east side of Piccadilly Circus in London. It is currently a shopping arcade and part of the Trocadero Centre.

The first building bearing the name, a music hall formed from roofing the yard of the Black Horse Inn, was built in 1859 for Emil Loibl and Charles Sonnhammer. A gallery was constructed for the hall but it could not utilise the full width, because one part of the premises was used by Dr Kahn's "Delectable Museum of Anatomy". 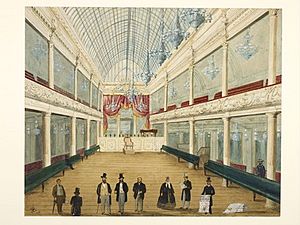 Interior of the newly opened London Pavilion Music Hall, 1861. Sonnhammer and Loibl are probably the figures in top hats at the front.

In 1885 Shaftesbury Avenue was built through part of the site, and a new London Pavilion Theatre was constructed. This opened on 30 November 1885 with a popular revue. The new theatre was the first 'music hall deluxe', with marble-topped tables for dining in the auditorium. According to Charles Stuart and A. J. Park in The Variety Stage (1895) the rebuilding signalled a new era of variety theatre:

Hitherto the halls had borne unmistakable evidence of their origins, but the last vestiges of their old connections were now thrown aside, and they emerged in all the splendour of their new-born glory. The highest efforts of the architect, the designer and the decorator were enlisted in their service, and the gaudy and tawdry music hall of the past gave way to the resplendent 'theatre of varieties' of the present day, with its classic exterior of marble and freestone, its lavishly appointed auditorium and its elegant and luxurious foyers and promenades brilliantly illuminated by myriad electric lights

The success of the venture led its owner, Villiers, to form a limited company; this became the first combine of music halls, Syndicate Halls Ltd. Lupino Lane made his London début here in 1903, as "Nipper Lane".

Between 1912 and 1936 the theatre presented a regular programme of musicals; these included Noël Coward's first success, On With the Dance in April 1925. There were appearances by Sir Harry Lauder; in October 1921 the American actor and vocalist Clifton Webb appeared here in Fun of the Fayre and again in October the following year as Phidas in Phi-Phi. In 1923 electric billboards were erected for the first time on the side of the building. 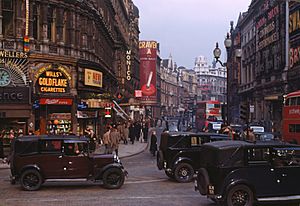 View of Shaftesbury Avenue from Piccadilly Circus with the London Pavilion on the right, circa 1949 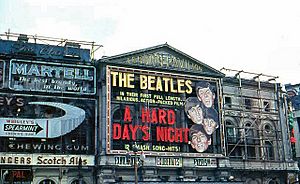 In 1934 the building underwent significant structural alteration, and was converted into a cinema at a cost of £70,000 by F. G. M. Chancellor, of Frank Matcham and Co. Intended as London outlet to premiere films released by United Artists, the first film to be screened at the Pavilion was the Alexander Korda release The Private Life of Don Juan which was shown from 5 September 1934; Korda had recently signed an agreement with the American company to release his films. For the première of The Curse of Frankenstein in May 1957 for which the foyer was revamped to look like Frankenstein's laboratory, complete with the Monster in a tank. In October 1962 it premiered Dr. No, the first James Bond film, and in July 1964 was the venue for the premiere of A Hard Day's Night. The cinema closed on 26 April 1981 and the site remained in limbo for some years.

In 1986, the interior of the building was gutted and converted into a shopping arcade, preserving only the 1885 façade and the outer walls and roof. A wax figure exhibition opened in the building that same year, run by the Madame Tussauds Group, called Rock Circus. The exhibition consisted of waxworks of famous rock and pop musicians. The Rock Circus exhibition closed in September 2001.

In 2000 the building became part of the Trocadero Centre, and signage on the building was altered in 2003 to read London Trocadero.

The basement of the building connects with Piccadilly Circus tube station and the rest of the Trocadero Centre.

The London Pavilion housed Ripley's Believe It or Not!, a visitor attraction dedicated to the weird, the unusual and the unbelievable, which was open from August 2008 until 25 September 2017.

On 6 October 2018, BODY WORLDS London opened in the London Pavilion. Part of the BODY WORLDS brand, the exhibition displays over 200 real human bodies and organ specimens preserved through the method of Plastination. All specimens were donated to the BODY WORLDS donor program for the purpose of educating the public about anatomy and physiology. The exhibition invites visitors to discover the beauty beneath their skin as every major organ system is explored.

All content from Kiddle encyclopedia articles (including the article images and facts) can be freely used under Attribution-ShareAlike license, unless stated otherwise. Cite this article:
London Pavilion Facts for Kids. Kiddle Encyclopedia.