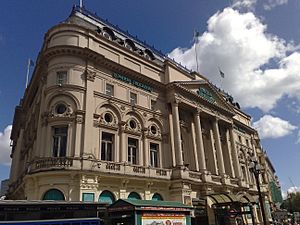 The London Trocadero was an entertainment complex on Coventry Street, with a rear entrance in Shaftesbury Avenue, London. It was originally built in 1896 as a restaurant, which closed in 1965. In 1984, the complex reopened as an exhibition and entertainment space. It became known for the video-game oriented SegaWorld attractions which were added in 1996, and later downscaled and renamed to "Funland" before its closure in 2011. Part of the building was opened as a hotel in 2020.

The name Trocadero indirectly derives from the Battle of Trocadero in 1823, through the Palais du Trocadéro in Paris, named after the French victory. Since at least 1919, the Trocadero has been abbreviated to the Troc or Chicarito, and under that name it appears in a poem by John Betjeman. 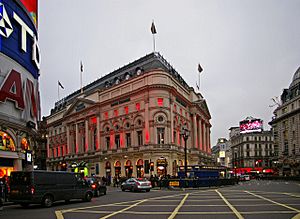 The Trocadero Restaurant of J. Lyons and Co. opened in 1896 on a site on Coventry Street, near the theatres of the West End. A one time maître d'hôtel of the Trocadero was French-born Raymond Monbiot, great-grandfather of the journalist and environmentalist George Monbiot.

The new settings were done in an Opera Baroque style, and the various Trocaderos of the English-speaking world have derived their names from this original, the epitome of grand Edwardian catering. Murals on Arthurian themes decorated the grand staircase, and the Long Bar catered to gentlemen only. During World War I, the Trocadero initiated the first "concert tea": tea was served in the Empire Hall, accompanied by a full concert programme. After the war, cabaret was a feature of the Grill Room. The Trocadero closed on 13 February 1965.

In 1984, the Trocadero was redeveloped as a tourist-oriented entertainment, cinema and shopping complex. Providing 450,000 square feet (42,000 m2) of leisure space, it was the largest leisure scheme in the United Kingdom at the time; only being matched 19 years later by the similar sized Xscape development in Castleford.

It retained the external Baroque facade, but gutted the interior and added a Guinness Book of World Records Exhibition. But tenants were limited, and the half-finished development was eventually sold to Burford Group plc, led by Nick Leslau and Nigel Wray. Nickelodeon UK broadcast live from there from 1994 until 1996 when they moved to Rathbone Place. 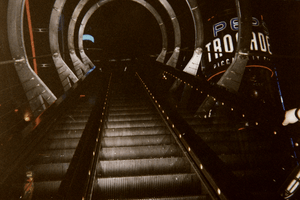 The Trocadero Centre received a boost in the late 1990s with the addition of sponsorship from Pepsi, and Sega as an anchor tenant. The launch of SegaWorld, a large amusement arcade occurred on 7 September 1996, which included a large statue of Sonic the Hedgehog over the front entrance. Pepsi sponsored The Pepsi Max Drop and from 1997 the Pepsi IMAX cinema, the first 3D IMAX cinema in the UK. It was also home to the second series of Channel 4's daily reality show The Salon.

However, resultant visitor numbers were poor, and the Guinness Records exhibition closed in the mid-1990s. Following the loss of Sega's sponsorship in 1999, Segaworld became Funland, named after the original arcade that had operated on the basement floor of the building since 1990, and was subsequently reduced in size. The Pepsi-sponsored IMAX cinema closed in March 2000 shortly after the newer London IMAX opened on the South Bank, and the Drop Ride closed around the same time (the Drop Ride was relocated to Funland in Hayling Island, which has no relation to Funland in the Trocadero beyond the name). Remains of old attractions could still be seen around the centre, such as a wall with a gun-barrel motif that used to house the James Bond: License to Thrill ride. The top floors were kept open until autumn 2002, when they were closed and the disused escalator was blocked off with a drinks machine. This was the original entrance to Segaworld when Funland occupied the lower floors. In October 2005, the centre was used as a backdrop for the final scenes of Madonna's "Hung Up" video. 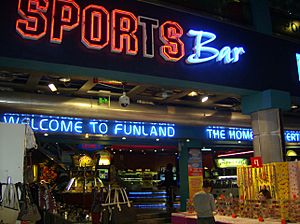 Criterion Capital acquired the Trocadero in 2005, and unveiled plans to comprehensively redevelop the site while retaining the listed facade. In 2009, a plan to build a pod hotel with 500 budget rooms inside the building was announced. The 'rocket' escalator was removed in May 2011, and what remained of Funland closed in July 2011.

All content from Kiddle encyclopedia articles (including the article images and facts) can be freely used under Attribution-ShareAlike license, unless stated otherwise. Cite this article:
London Trocadero Facts for Kids. Kiddle Encyclopedia.