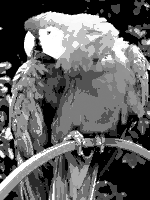 Monochrome comes from the two Greek words mono (meaning "one") and chroma (meaning "surface" or "the colour of the skin"). If something is monochromatic, it only has a single color.

In physics, the word is used when talking about electromagnetic radiation of a single wavelength.

For an image, the term monochrome usually means the same as black-and-white or grayscale. It may also be used when talking about other combinations that only have two colors, for example, green-and-white or green-and-black. In computing, monochrome has two meanings:

All content from Kiddle encyclopedia articles (including the article images and facts) can be freely used under Attribution-ShareAlike license, unless stated otherwise. Cite this article:
Monochrome Facts for Kids. Kiddle Encyclopedia.