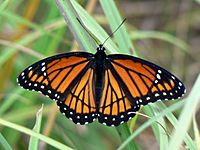 Upper side of the wings

The Viceroy (Limenitis archippus) is a species of butterfly. It belongs in the family Nymphalidae. It is found in North America.

The wings are orange. They have black veins and black wing edges. There is a black band across the hind wing (bottom wing). This band can sometimes be faint or missing if the butterfly lives in the southwestern United States. In Florida, the Viceroy is dark reddish brown instead of orange. The wingspan ranges from 6.6 to 7.6 cm (2.6 to 3 in).

The caterpillar feeds on trees in the willow family Salicaceae, including willows (Salix), and poplars and cottonwoods (Populus). The caterpillars store the salicylic acid in their bodies, which makes them bitter, and upsets predators' stomachs. As further protection, the caterpillars, as well as their chrysalis stage, resemble bird droppings.

The Viceroy (Limenitis archippus) is a North American butterfly with a range from the Northwest Territories along the eastern edges of the Cascade Range and Sierra Nevada mountains, southwards into central Mexico.

Its wings have an orange and black pattern, and over most of its range it is a Müllerian mimic with the Monarch butterfly (Danaus plexippus). What this means is that they are both bitter tasting, and they both use the same pattern of colours where they live in the same territory. Müllerian mimicry is a shared warning advertisement, in this case of foul taste.

Adults fly in the late morning and early afternoon.

This butterfly is found in a wide range of wet, open places such as water edges, wet meadows, and freshwater marshes. 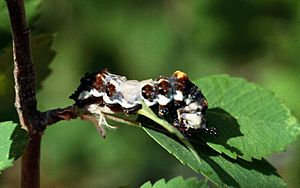 The female lays her eggs singly. They are laid at the tip of the host plant leaf (the host plant is the plant that the caterpillar feeds on). The egg is pale green or pale yellow. It turns gray later. The caterpillar feeds at night. It mimics a bird dropping. It is white, brown, black, and olive green. There are two greenish bumps on the thorax. There are also two spines near the head. The chrysalis also mimics a bird dropping. It is white, brown, and black. There is a large brownish bump on the abdomen. The caterpillar hibernates in a leaf shelter. It lays one set of eggs in northern Canada, and 2-3 more groups in southern Canada and the United States.

All content from Kiddle encyclopedia articles (including the article images and facts) can be freely used under Attribution-ShareAlike license, unless stated otherwise. Cite this article:
Viceroy (butterfly) Facts for Kids. Kiddle Encyclopedia.