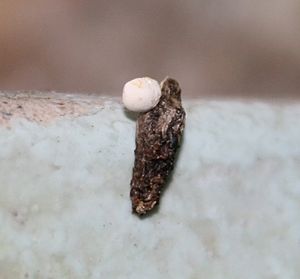 White cast of uric acid defecated with the dark feces from a lizard. Insects, birds and some other reptiles also undergo a similar mechanism.

Excretion is one of the most basic functions of life. It is the process of eliminating waste products of metabolism and other non-useful materials. It is an essential process in all forms of life. It contrasts with secretion, where the substance may have specific tasks after leaving the cell.

In mammals, excretion is the formation of urine in the kidneys, and expelling carbon dioxide from the lungs. These waste products are eliminated by urination and breathing out respectively. If excretion does not occur in an organism, waste products accumulate, which eventually kill the organism.

Also, food waste is expelled through the anus. Other substances are secreted into the bile, and then eliminated in the faeces. The skin and lungs also have excretory functions: the skin eliminates metabolic wastes like urea and lactic acid through sweating, and the lungs expel carbon dioxide.

Aquatic animals usually excrete ammonia directly into the water, as this compound is soluble and there is ample water available for dilution. In terrestrial animals ammonia-like compounds are converted into other nitrogenous materials as there is less water in the environment, and ammonia itself is toxic.

Reptiles and birds excrete their nitrogenous wastes as uric acid in the form of a white paste. This allows efficient water retention and it can be stored more easily in the egg. Both uric acid and faeces are expelled through a common opening called the cloaca. Their waste is usually two-coloured: part white (uric acid) and part green or black (organic waste).

Many bird species, especially seabirds, can also excrete salt via specialized nasal salt glands, the saline solution leaving through nostrils in the beak.

All content from Kiddle encyclopedia articles (including the article images and facts) can be freely used under Attribution-ShareAlike license, unless stated otherwise. Cite this article:
Excretion Facts for Kids. Kiddle Encyclopedia.