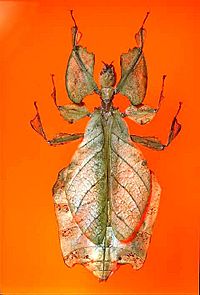 A leaf insect in the Children’s Museum of Indianapolis

The family Phylliidae (often misspelled 'Phyllidae') contains the living true leaf insects or walking leaves, which include some of the most remarkable leaf mimics in the entire animal kingdom. They occur from South Asia through Southeast Asia to Australia. There are different views about their taxonomy.

Leaf insects use camouflage to take on the appearance of a leaf. They do this so accurately that predators often aren't able to distinguish them from real leaves. In some species the edge of the leaf insect's body even has the appearance of bite marks. To further confuse predators, when the leaf insect walks, it rocks back and forth, to mimic a real leaf being blown by the wind.

They and stick insects go together in the Order Phasmatodea.

The scholar Antonio Pigafetta may have been the first to document the creature. Sailing with Ferdinand Magellan's circumnavigational expedition, he studied and chronicled the fauna on the island of Cimbonbon as the fleet hauled ashore for repairs.

All content from Kiddle encyclopedia articles (including the article images and facts) can be freely used under Attribution-ShareAlike license, unless stated otherwise. Cite this article:
Leaf insect Facts for Kids. Kiddle Encyclopedia.