Costa's hummingbird (Calypte costae) is a bird species in the family Trochilidae.

This species is very small, a mature adult growing to only 3–3.5 in (7.6–8.9 cm) in length, a wingspan of 11 cm, and an average weight of 3.05 g for males and 3.22 g for females. The male Costa's has a mainly green back and flanks, a small black tail and wings, and patches of white below their gorgeted throat and tail. Its most distinguishing feature is its vibrant purple cap and throat with the throat feathers flaring out and back behind its head. The female Costa's hummingbird is not as distinct as the male, having grayish-green above with a white underbelly. 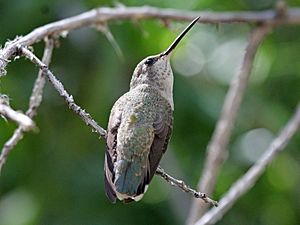 Costa's hummingbird is fairly common in the arid brushy deserts and any nearby gardens of the Southwestern United States and the Baja California Peninsula of Mexico.

The male Costa's hummingbird's courtship display is a spirited series of swoops and arcing dives, carefully utilizing a proper angle to the sun to show off his violet plumage to impress prospective mates. Each high-speed dive will also pass within inches of the female, perched on a nearby branch, which will be accented by a high-pitched shriek that is produced by the tail. Separately, the male will perch and produce similar sounds in his song—except, the song is vocal rather than tail-generated.

The female hummingbird constructs a small cup-shaped nest out of plant fibers, down and at times spider silk, coated with lichen to hold it together. The nest will be situated above ground on a yucca stalk or tree limb.

The female lays just two eggs, which are white in color, which she will incubate for 15 to 18 days before the young hatch. The young Costa's hummingbirds leave the nest after 20 to 23 days.

Like all other hummingbird species, Costa's hummingbird feeds on flower nectar and any tiny insects that it happens to find in the flower petals.

As with other species, it can slow down its metabolism during cold nights when it enters a hibernation-like state known as torpor and its heart and respiration rate are dramatically slowed.

The IUCN describes them as of least concern. The population is stable and there are no known threats. They are found in at least one protected area.

All content from Kiddle encyclopedia articles (including the article images and facts) can be freely used under Attribution-ShareAlike license, unless stated otherwise. Cite this article:
Costa's hummingbird Facts for Kids. Kiddle Encyclopedia.