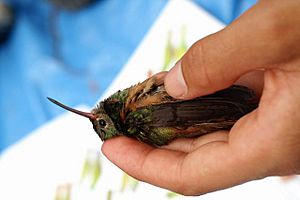 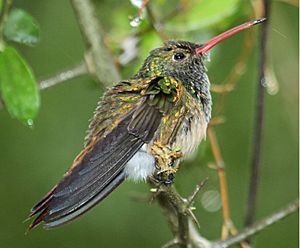 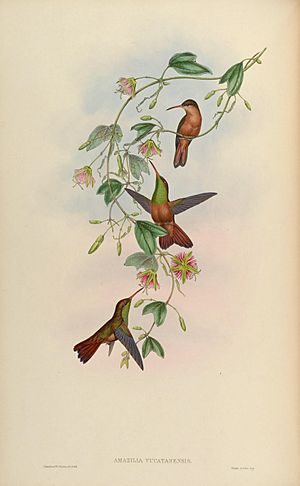 Illustration from John Gould's 1861 monograph: A monograph of the Trochilidae, or family of humming-birds, Volume 5.

Adults are a metallic olive green above and buffy in the lower breast. The tail and primary wings are rufous in colour and slightly forked. The underwing is white. The bill of the male is straight and very slender. It is red in colouration with a darker tip. The throat is a metallic golden green. The female has a dark upper bill, and is less colourful than the male.

Their breeding habitat is forests and thickets that extend from the lower Rio Grande Valley of southernmost Texas in the United States through the Yucatán Peninsula of eastern Mexico, ending in northern Belize and northwestern Guatemala in Central America. It prefers pine-oak forests, semi-arid scrub and thickets along watercourses. The female builds a nest in a protected location such as a shrub or tree. Both males and females of any age aggressively defend feeding locations within his or her territory. Females lay two white eggs.

This hummingbird is partially migratory. The buff-bellied hummingbird winters in small numbers along the Gulf Coast of the United States from Texas to the Florida panhandle.

These birds feed on nectar from flowers and flowering trees using a long extendable tongue and catch insects on the wing.

All content from Kiddle encyclopedia articles (including the article images and facts) can be freely used under Attribution-ShareAlike license, unless stated otherwise. Cite this article:
Buff-bellied hummingbird Facts for Kids. Kiddle Encyclopedia.