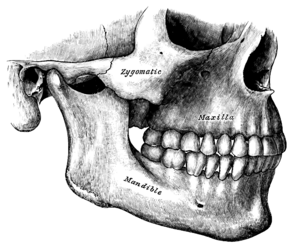 The maxilla is the upper jaw. In mammals it is tightly fused to the skull, but in fish and reptiles it is usually not. In snakes, for example, the maxilla is able to move relative to the rest of the skull, and the jaws can separate entirely to swallow prey.

The alveolar process of the maxillae holds the upper teeth, and is referred to as the maxillary arch. Each maxilla attaches laterally to the zygomatic bones (cheek bones).

Each maxilla assists in forming the boundaries of three cavities:

Each maxilla also enters into the formation of two fossae: the infratemporal and pterygopalatine, and two fissures, the inferior orbital and pterygomaxillary. -When the tender bones of the upper jaw and lower nostril are severely or repetitively damaged, at any age the surrounding cartilage can begin to deteriorate just as it does after death.

In most vertebrates, the foremost part of the upper jaw, to which the incisors are attached in mammals consists of a separate pair of bones, the premaxillae. These fuse with the maxilla proper to form the bone found in humans, and some other mammals. In bony fish, amphibians, and reptiles, both maxilla and premaxilla are relatively plate-like bones, forming only the sides of the upper jaw, and part of the face, with the premaxilla also forming the lower boundary of the nostrils. However, in mammals, the bones have curved inward, creating the palatine process and thereby also forming part of the roof of the mouth.

Birds do not have a maxilla in the strict sense; the corresponding part of their beaks (mainly consisting of the premaxilla) is called "upper mandible".

Cartilaginous fish, such as sharks, also lack a true maxilla. Their upper jaw is instead formed from a cartilaginous bar that is not homologous with the bone found in other vertebrates.

All content from Kiddle encyclopedia articles (including the article images and facts) can be freely used under Attribution-ShareAlike license, unless stated otherwise. Cite this article:
Maxilla Facts for Kids. Kiddle Encyclopedia.