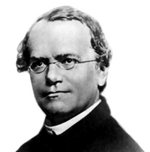 The basic rules of genetics were first discovered by a monk named Gregor Mendel in the 1850s, and published in 1866. For thousands of years, people had noticed how traits are inherited from parents to their children. However, Mendel's work was different because he did experiments on plants, and designed those experiments very carefully.

In his experiments, Mendel studied how traits were passed on in pea plants. He started his crosses with plants that bred true, and counted characters that were either/or in nature (either tall or short). He bred large numbers of plants, and expressed his results numerically. He used test crosses to reveal the presence and proportion of recessive characters.

Mendel's laws explained the results he got with his pea plants. Later, geneticists discovered that his laws were also true for other living things, even humans. Mendel's findings from his work on the garden pea plants helped to establish the field of genetics. His contributions were not limited to the basic rules that he discovered. Mendel's care towards controlling experiment conditions along with his attention to his numerical results set a standard for future experiments.

All content from Kiddle encyclopedia articles (including the article images and facts) can be freely used under Attribution-ShareAlike license, unless stated otherwise. Cite this article:
Mendelian inheritance Facts for Kids. Kiddle Encyclopedia.