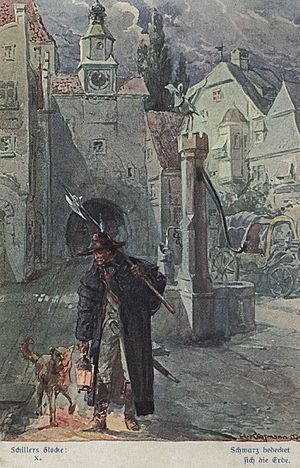 Drawing of a night watchman in a town in Germany. He carries a lantern and a halberd. His helper dog walks beside him.

Watchmen were groups of men who discouraged crime and enforced the law. They were usually authorised by the state or government. Watchmen have existed in many places around the world throughout history. Today, the job of law enforcement has generally been taken over by organised police.

An early reference to a watch can be found in the Bible. Ezekiel says that it was the watchmen's duty to sound the alarm to warn the people that they were under attack (Ezekiel 33:1-6). The Roman Empire turned the role of a watchman into a profession. The Vigiles was the city watch in Rome. It was the city's police force.

In England, the Ordinance of 1233 required the appointment of watchmen. The Assize of Arms of 1252 and the Statute of Winchester of 1285 are considered among the earliest examples of a police in England. The Assize of Arms required that constables be appointed to call men to fight when the town was under attack. It also required them to stop disturbances of the peace, and to take criminals to the sheriff. By 1415, a watch was appointed to the Parliament of England. King Henry VII appointed a watch for his house, the Tower of London, in 1485. These watchmen became known as the Beefeaters.

All content from Kiddle encyclopedia articles (including the article images and facts) can be freely used under Attribution-ShareAlike license, unless stated otherwise. Cite this article:
Watchman Facts for Kids. Kiddle Encyclopedia.