The French special collectivity of New Caledonia is divided into three provinces, which in turn are divided into 33 communes. There is also a system of eight tribal areas for the indigenous Kanak people, and three decentralized subdivisions.

New Caledonia is divided into three provinces. The North and South Provinces are located on the New Caledonian mainland, while the Loyalty Islands Province is a series of islands off the mainland.

Each province has its own flag and emblem and has considerable powers, including all powers that are not explicitly the prerogative of either the territorial Congress of New Caledonia in Nouméa or parliament of the French Republic in Paris. The borders and powers of the provinces were outlined in 1988 as part of the Matignon Accords. 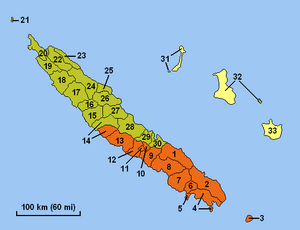 Administrative divisions of New Caledonia:      North Province      South Province      Loyalty Islands Province. The numbers correspond to the list of communes to the left.

New Caledonia is subdivided into 33 communes (municipalities), which in most cases predate the provinces. One commune, Poya, was divided between the two mainland provinces as part of the Matignon Accords. On the list below, communal seats are shown in parentheses if different from the commune name.

Other types of divisions 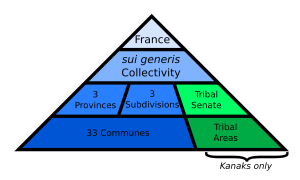 The hierarchy of New Caledonia's administrative subdivisions, shown in a triangle.

In addition, a parallel layer of administration exists for Kanak tribal affairs; these are called aires coutumières ("tribal areas") and are eight in number. Their jurisdiction does not encompass non-Kanaks living within these zones. The tribal areas more or less correspond to the indigenous language areas and/or areas of pre-French tribal alliances.

There are also three subdivisions, simply known as subdivisions in French, with the same names and boundaries as the three provinces, except that the commune of Poya is entirely within the North Subdivision. Unlike the provinces, which are full political divisions with their own assemblies and executives, the subdivisions are merely decentralized divisions of the French central state, akin to the arrondissements of Metropolitan France, with a Deputy Commissioner of the Republic (commissaire délégué de la République), akin to a subprefect of Metropolitan France, in residence in each subdivision's chief town.

The subdivision chief towns are the same as the provincial capitals except in the South Subdivision where the chief town is La Foa, whereas the capital of the South Province is Nouméa. Thus, although the provincial assembly of the South Province sits in Nouméa, the South Subdivision's Deputy Commissioner of the Republic is in residence in La Foa. This was decided in order to counterbalance the overwhelming weight of Nouméa in New Caledonia.

All content from Kiddle encyclopedia articles (including the article images and facts) can be freely used under Attribution-ShareAlike license, unless stated otherwise. Cite this article:
Administrative divisions of New Caledonia Facts for Kids. Kiddle Encyclopedia.