Kadıköy in Byzantine Chalcedon, is a large, populous, and cosmopolitan district in the Asian side of Istanbul, Turkey on the northern shore of the Sea of Marmara. Kadıköy is also the name of the most prominent neighbourhood of the district, a residential and commercial area that, with its numerous bars, cinemas and bookshops, is the cultural centre of the Anatolian side of Istanbul. Kadıköy became a district in 1928 when it was separated from Üsküdar district. 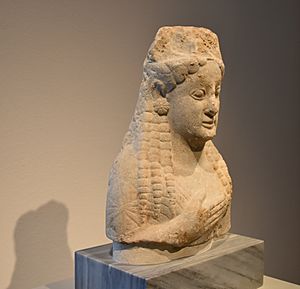 Fragment of a statue of a girl from Chalcedon, Turkey, ca. 500 BCE

Relics dating to 5500-3500 BC (Chalcolithic period) have been found at the Fikirtepe Mound, and articles of stone, bone, ceramic, jewelry and bronze show that there has been a continuous settlement since prehistoric times. A port settlement dating from the Phoenicians has also been discovered. Chalcedon was the first settlement which the Greeks from Megara established on the Bosphorus in 685 BC. 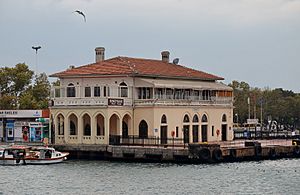 Chalcedon changed hands time and time again, as Persians, Bithynians, Romans, Byzantines, Arabs, Crusaders, and Turks passed through the area, which was badly damaged during the Fourth Crusade and came into Ottoman hands in 1353, a full century before Constantinople. Because of this, Kadıköy has the oldest mosque in İstanbul, built almost a century before the conquest of Constantinople in 1453.

At the time of the conquest, Chalcedon was a rural settlement outside the protection of the city. It was soon put under the jurisdiction of the Constantinople courts, hence the name Kadıköy, which means Village of the Judge. In the Ottoman period, Kadıköy became a popular market for agricultural goods and in time developed into a residential area for people who would commute to the city by boat. The population was the typical Ottoman Constantinople mix of Armenians, Greeks, Albanians, Jews and Turks. Kadıköy has several churches (Greek, Armenian, Serbian, Catholic, Protestant) and synagogues. 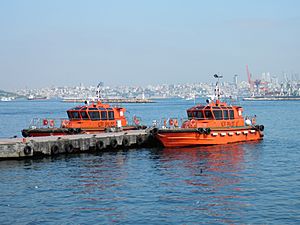 The centre of Kadıköy today is the transportation hub for people commuting between the Asian side of the city and the European side across the Bosphorus. There is a large bus and minibus terminal next to the ferry docks. Ferries are the most dominantly visible form of transport in Kadıköy, and the central market area is opposite the ferry dock.

Marmara University has most of its buildings in Kadıköy, while the largest private university in İstanbul, Yeditepe University, is located on the hill named "Kayışdağı". A new state university, İstanbul Medeniyet University. Another private institution for higher education, the Doğuş University, is situated in the Acıbadem neighborhood of Kadıköy. 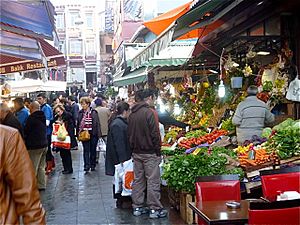 Kadıköy has many houses from the Ottoman and some from Roman period which are hidden in its side streets. Some of them have been turned into cafés, pubs and restaurants, particularly serving seafood and rest of them waiting for restoration.

There is a lot of residential property in the centre of Kadıköy, mostly somewhat dilapidated today, but there are still quiet suburban streets. The area is home to many students as well as a small number of foreign residents.

Kadıköy has been always a place with population belonging to the three main religions, Islam, Christianity and Judaism. There are still many examples of mosques, Greek or Armenian churches and synagogues. Hemdat Israel Synagogue, situated in Yeldeğirmeni neighbourhood close to Haydarpaşa Terminal, is one of the oldest Jewish houses of prayer in İstanbul. 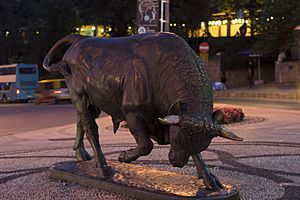 Kadıköy is a busy shopping district, with a wide variety of atmospheres and architectural styles. The streets are varied, some being narrow alleyways and others being pedestrian zones. Turkey's biggest food market is there and has an immense turnover of fresh foods and other products from all around Turkey. There are also modern shopping centres, most notably the large Tepe Nautilus Shopping Mall behind the center of Kadıköy, and pavements crowded with street vendors. 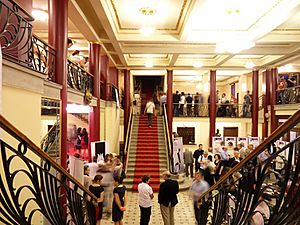 At the top of the shopping district there is an intersection, with a statue of a bull, called Altıyol (Six Ways), where a road leads to the civic buildings and a huge street market called Salı Pazarı (Tuesday Market). The working-class residential districts of are located behind the civic buildings.

Kadıköy has many cinemas. Süreyya Opera House is a recent redevelopment named after the historic movie theatre.

İstanbul Toy Museum in Göztepe has on display 4,000 toys and miniatures, from Turkey and abroad; many of the exhibits are antiques, some of which date back nearly 200 years.

All content from Kiddle encyclopedia articles (including the article images and facts) can be freely used under Attribution-ShareAlike license, unless stated otherwise. Cite this article:
Kadıköy Facts for Kids. Kiddle Encyclopedia.