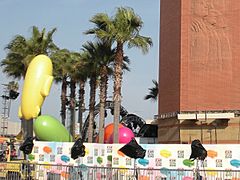 The Orange Carpet and pre-show stage under construction at the corner of Figueroa Street and Jefferson Boulevard, in Los Angeles

The 25th Annual Nickelodeon Kids' Choice Awards was held on March 31, 2012, at 8 p.m. ET in Los Angeles, California, in the United States, where the winners received an orange-colored blimp trophy. Big Help Award winner Taylor Swift received a special silver-colored blimp from First Lady Michelle Obama. The complete list of nominees for the 2012 Kids' Choice Awards was released on January 11, 2012, leading up to the release of Men in Black 3 on May 25, 2012. The event was hosted by MIB 3 star Will Smith, who with ten KCA blimps has won the most awards in previous telecasts. A record-breaking 223 million votes for favorites in 20 categories were cast during this year's voting period, up 11% over last year's votes.

The rating was 6.162 million viewers, leading all cable programs for the week ending April 1, 2012.

All content from Kiddle encyclopedia articles (including the article images and facts) can be freely used under Attribution-ShareAlike license, unless stated otherwise. Cite this article:
2012 Kids' Choice Awards Facts for Kids. Kiddle Encyclopedia.