Jada Koren Pinkett Smith (born September 18, 1971) is an American actress, dancer, singer - songwriter, and businesswoman. She began her career in 1990, when she made a guest appearance in the short-lived sitcom True Colors. She starred in the TV series A Different World, produced by Bill Cosby for six seasons.

Pinkett Smith launched her music career in 2002, when she helped create the metal band Wicked Wisdom, for which she is a singer and songwriter. Smith also created a production company, in addition to writing a book, published in 2004.

She has been married to actor/musician Will Smith since 1997. They have two children, son Jaden and daughter Willow.

Born in Baltimore, Maryland, Jada Koren Pinkett Pinkett Smith is of African American and Jamaican descent. Her Grandmother noticed her granddaughter's passion for the performing arts and enrolled her in piano, tap dance, and ballet lessons. She has a younger brother, actor/writer Caleeb Pinkett.

Pinkett Smith attended the Baltimore School for the Arts, where she met and became friends with classmate Tupac Shakur. She majored in dance and theatre and graduated in 1989. She continued her education at the North Carolina School of the Arts, and became fully invested in pursuing her acting career.

Perhaps her best-known role to date is the part of human rebel Niobe in the films The Matrix Reloaded (2003) and The Matrix Revolutions (2003), sequels to 1999's The Matrix, and the related video game Enter The Matrix (2003). The character was written specifically with Pinkett Smith in mind. Directly after she filmed her scenes for Ali, Pinkett Smith flew to Australia to work on the Matrix sequels, she has starred in many movies another being with actor and comedian Eddie Murphy in the 1996 remake of The Nutty Professor.

Under the stage name Jada Koren, Pinkett Smith formed the metal band Wicked Wisdom in 2002. The band consists of Pinkett Smith performing lead vocals. The band is managed by James Lassiter and Miguel Melendez of Overbrook Entertainment, a company co-founded by Pinkett Smith's husband Will Smith.

The band's self-titled debut album was released on February 21, 2006. AllMusic reviewer Alex Henderson said of the album, "Pinkett Smith shows herself to be an expressive, commanding singer" and that "Wicked Wisdom shows considerable promise". The band promoted the album in 2006, touring with heavy metal band Sevendust. 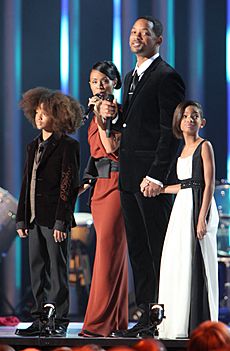 Jada met Will Smith in 1994 on the set of Smith's television show The Fresh Prince of Bel-Air, when she auditioned for the role of his character's girlfriend, Lisa Wilkes. She was considered too short. Jada and Will became friends, and began dating in 1995. On December 31, 1997 they married.

Together with Smith, Pinkett Smith has created the Will and Jada Smith Family Foundation in Baltimore, Maryland, a charity which focuses on youth in urban inner cities and family support. The charity was awarded the David Angell Humanitarian Award by The American Screenwriters Association (ASA) in 2006. In December 2006, she donated $1 million to the Baltimore School for the Arts in memory of her friend Tupac Shakur.

All content from Kiddle encyclopedia articles (including the article images and facts) can be freely used under Attribution-ShareAlike license, unless stated otherwise. Cite this article:
Jada Pinkett Smith Facts for Kids. Kiddle Encyclopedia.