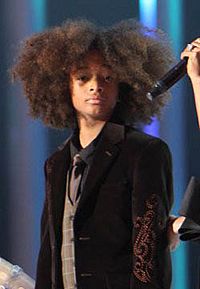 Jaden Christopher Syre Smith (born July 8, 1998) is an American actor and rapper. He is the son of actors Will Smith and Jada Pinkett Smith. He is the older brother of singer Willow Smith and younger half-brother of Trey Smith. His first movie role was in the 2006 movie The Pursuit of Happyness. He has also appeared in The Day the Earth Stood Still (2008) and The Karate Kid (2010).

All content from Kiddle encyclopedia articles (including the article images and facts) can be freely used under Attribution-ShareAlike license, unless stated otherwise. Cite this article:
Jaden Smith Facts for Kids. Kiddle Encyclopedia.