Good Luck Charlie is an American sitcom that originally aired on Disney Channel from April 4, 2010, to February 16, 2014. The series' creators, Phil Baker and Drew Vaupen, wanted to create a program that would appeal to entire families, not just children. It focuses on the Duncan family of Denver as they adjust to the births of their fourth and fifth children, Charlotte "Charlie" (Mia Talerico) and Toby (Logan Moreau). In each episode, Teddy Duncan (Bridgit Mendler) adds to a video diary that contains advice for Charlie about their family and life as a teenager. Teddy tries to show Charlie what she might go through when she is older for future reference. Each video diary ends with Teddy (or another family member, even Charlie) saying the eponymous phrase, "Good luck, Charlie".

Among other decisions, executives included adult-centric scenes and changed the series title from Oops to Love, Teddy and finally to Good Luck Charlie in order to ensure the series would appeal to all family members. Good Luck Charlie premiered on Disney Channel in the United States on April 4, 2010, in Canada on April 5, 2010, in the United Kingdom and Ireland on May 14, 2010, and in Australia and New Zealand on July 23, 2010. In March 2011, a feature-length Christmas Disney Channel Original Movie based on the series, entitled Good Luck Charlie, It's Christmas!, began production for a December 2011 premiere.

In June 2013, Disney Channel announced that the series would end its run after four seasons. The finale aired on February 16, 2014, with a one-hour episode.

Set in Denver, Colorado, the series focuses on the Duncan family, who are still adjusting to the birth of their fourth child, Charlotte "Charlie" Duncan (Mia Talerico). When parents Amy (Leigh-Allyn Baker), a nurse, and Bob (Eric Allan Kramer), an exterminator, return to work, they ask their three older children—PJ (Jason Dolley), Teddy (Bridgit Mendler), and Gabe (Bradley Steven Perry)—to help raise their little sister. At the same time, Teddy, PJ, and Gabe try to deal with school and general social challenges in their lives.

The events in each episode become material for a video diary that Teddy is making for Charlie. Teddy hopes the videos will provide useful advice for Charlie after they have both grown up and Teddy has moved out. At the end of each video, she (and/or other cast members) says, "Good luck, Charlie" or may even say it indirectly such as "Wish them good luck, Charlie." During the movie, Amy reveals to Teddy that she is pregnant with her fifth child, but this story plot is not brought into the series until the third season, during which Amy gives birth to a baby boy, Toby. Each episode ends, after the video diary, with an event that is weird and usually cannot happen in real life. 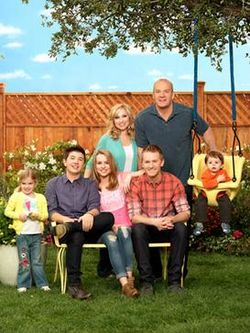 Good Luck Charlie, It's Christmas! also known as "Good Luck Charlie: The Road Trip Movie" is a 2011 Christmas film based on the series. The film premiered December 2, 2011, on the Disney Channel. The film was directed by Arlene Sanford and written by Geoff Rodkey. The Disney Channel Original Movie follows the Duncan family on their road trip to Amy Duncan's parents' house for Christmas.

A Pakistani adaptation of the show titled Peek-A-Boo Shahwaiz premiered on Play Entertainment from 15 July 2018.

Although a soundtrack for the show was not released, several songs were produced for the show.

The series premiered to 4.7 million viewers, making it the highest-rated series premiere for a Disney Channel Original Series since The Suite Life on Deck in 2008, and the week's highest-rated cable program. Maclean's reported that overall, the first season "has been doing about as well as Disney's more successful shows – The Suite Life and so on".

The most viewed episode in the United Kingdom and Ireland was "Special Delivery" with 602,000 viewers when it aired on October 12, 2012.

On June 20, 2013, Disney Channel announced that Season 4 Episode 19, "Down a Tree", would feature a married gay couple, making Good Luck Charlie the first Disney Channel series to do so. LGBT rights organization GLAAD as well as actresses Miley Cyrus and Evan Rachel Wood expressed their support and lauded Disney for the inclusion of the characters. By contrast, the One Million Moms division of the American Family Association protested and asked Disney not to air the episode. In a statement to TV Guide, a Disney Channel spokesperson stated that the episode was "developed to be relevant to kids and families around the world and to reflect themes of diversity and inclusiveness." Disney aired the episode as planned on January 26, 2014.

All content from Kiddle encyclopedia articles (including the article images and facts) can be freely used under Attribution-ShareAlike license, unless stated otherwise. Cite this article:
Good Luck Charlie Facts for Kids. Kiddle Encyclopedia.