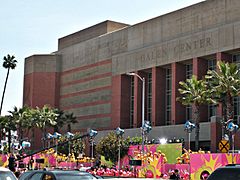 The 26th Annual Nickelodeon Kids' Choice Awards was held on March 23, 2013, at the Galen Center in Los Angeles, California. Actor Josh Duhamel hosted the ceremony. The "Orange Carpet" was set up in front of Galen Center on the sidewalks of Jefferson Boulevard. Voting on the 22 categories began on Thursday, February 14, 2013.

Presenters and performers, and stunts

Events within the show

In a pre-show promo, Josh Duhamel was slimed while revealing that he was the 2013 Kids' Choice Awards' host. Duhamel was also seen bathing in a bathtub full of slime during the promo. During the show, Josh Hutcherson, Amanda Seyfried, and a group of kids appeared in a special green room to advertise the upcoming movie "Epic". They were slimed by Mub and Grub from the movie.

All content from Kiddle encyclopedia articles (including the article images and facts) can be freely used under Attribution-ShareAlike license, unless stated otherwise. Cite this article:
2013 Kids' Choice Awards Facts for Kids. Kiddle Encyclopedia.