Cory Allan Michael Monteith (May 11, 1982–July 13, 2013) was a Canadian actor and musician, best known for his role as Finn Hudson on the Fox television series Glee. 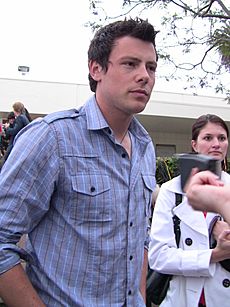 Monteith was born in Calgary, but raised in Victoria, British Columbia. He began his acting career in Vancouver, British Columbia. He played small roles in Final Destination 3, Whisper and Deck the Halls. He had a regular role in Kyle XY. He also guest starred in such Canadian-filmed television shows as Smallville, Supernatural, Flash Gordon, Stargate Atlantis and Stargate SG-1.

In 2009, Monteith was cast in the Fox series Glee, playing Finn Hudson, the male lead of the glee club and the quarterback of McKinley High School. For his audition tape, he drummed on Tupperware using pencils. The first time he sang in front of an audience was at his in-person audition, at which he sang "Honesty" by Billy Joel. He and Lea Michele, his Glee co-star, were included in Entertainment Weekly's 2009 "Summer Must List", being named "Summer's Must Songbirds" for their roles as Finn and Rachel on Glee, respectively.

In April 2010, Monteith was cast in the romantic comedy movie Monte Carlo. In May 2010, the cast of Glee went on a two week live tour with stops in Los Angeles, Phoenix, Chicago and New York City. The cast performed many hits from the show and had several skits between songs.

On August 8, 2010 he co-hosted the Teen Choice Awards. Monteith hosted the Gemini Awards in Toronto on November 13, 2010.

In January 2011, he was filmed for the movie Sisters and Brothers with Dustin Milligan, and it was announced that Monteith is at the center of a new untitled workplace comedy, starring and co-producing.

Monteith played drums for the Indie rock band "Bonnie Dune" based in Los Angeles. Members include lead singer Justin Wilczynski (who co-starred with Monteith on the short-lived MTV series Kaya), guitarist Seth Roberts (who is the singer of the band Lakes), and bassist Josh Kerr.

Monteith was born in Calgary, Alberta and raised in Victoria, British Columbia. He had one older brother. His parents divorced when he was 7 years old. He lived with his mother in Calgary, Alberta, with his father living in Oromocto, New Brunswick. Before becoming an actor, he worked in Nanaimo, British Columbia as a Wal-Mart people greeter, at a car wash, taxicab driver, school bus driver and roofer.

He lived in Los Angeles. He dropped out of school in the ninth grade. Monteith said in an interview: "It wasn't for me. I can remember ever since about the sixth or seventh grade, I just didn't understand why I had to learn what I was learning. For some reason, there was a spirit of rebellion in me."

Monteith was found dead in his Fairmont Pacific Rim hotel room on July 13, 2013 in Vancouver, British Columbia. He was 31.

All content from Kiddle encyclopedia articles (including the article images and facts) can be freely used under Attribution-ShareAlike license, unless stated otherwise. Cite this article:
Cory Monteith Facts for Kids. Kiddle Encyclopedia.