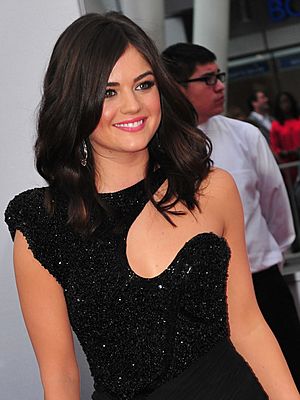 Karen Lucille "Lucy" Hale (born June 14, 1989 in Memphis, Tennessee) is an American actress and singer. Her movies include Scream 4, Bionic Woman and Privileged. She also acted in the TV series Pretty Little Liars. Hale was one of five winners of the reality show American Juniors. Hale recorded and released her debut studio album, Road Between in 2014.ale was born in Memphis, Tennessee, the daughter of Julie Knight and Preston Hale.[5][6] She was named after one of her great-grandmothers. Her mother is a registered nurse.[1] She has an older sister, Maggie,[1][7] and a step-sister, Kirby.[8] Hale was homeschooled.[9] During her childhood, she took acting and singing lessons.[10] In August 2012, Hale revealed she had suffered from an eating disorder.[11]She first appeared on television in the reality show American Juniors in 2003. She was part of the vocal quintet formed with the top 5 finishers.[12] After American Juniors, Hale moved to Los Angeles at age 15 in the hopes of getting a record deal.In December 2009, Hale was cast as Aria Montgomery in the TV series Pretty Little Liars, based on the book series by Sara Shepard.[18] Hale won a 2010 Teen Choice Award ("Choice Summer TV Star: Female") for her portrayal of Aria on the show.Hale was cast as the lead for A Cinderella Story: Once Upon a Song. Filming began in February 2011[22] and the film aired in January 2012. She hosted the April 25 episode of Punk'd where she successfully pranked Ian Harding, Vanessa Hudgens and Josh Hutcherson.[23]

All content from Kiddle encyclopedia articles (including the article images and facts) can be freely used under Attribution-ShareAlike license, unless stated otherwise. Cite this article:
Lucy Hale Facts for Kids. Kiddle Encyclopedia.