Puss in Boots is a main character in the Shrek franchise, also being portrayed as the title character and protagonist of the movie Puss in Boots (2011). He made his first appearance in the movie Shrek 2 (2004), soon becoming Shrek's partner and helper (alongside Donkey). In the movie Shrek the Third (2007), Puss helps Shrek find the heir to the throne of the Far Far Away Kingdom. The movie Shrek Forever After (2010) is primarily set in an alternate universe, where Puss is Princess Fiona's pet and has gained weight after his retirement. In the spin-off and prequel Puss in Boots, his origins are described. Puss also appears in the Netflix television series centered on him, The Adventures of Puss in Boots (2015–2018).

Puss was inspired by the title character of the fairy tale "Puss in Boots". His design, created by Tom Hester, was based on real cats. Several characters were used as inspirations for Puss's characterization, such as Zorro and Indiana Jones. The idea of Puss as the protagonist of a film was explored after his debut appearance. Antonio Banderas voices Puss in the English, Spanish, and Italian dubs of the Shrek franchise. While he initially tried a high-pitched voice for the character, he and the Shrek 2 filmmakers decided on a tone that was deeper than his normal voice. Banderas said that voicing Puss was an important part of his career. Eric Bauza provides Puss's voice in The Adventures of Puss in Boots.

The character is well liked, with critics praising his depiction and considering him a source of comic relief. Reviewers have regarded Puss as a popular Shrek character. Banderas's voice acting has also been praised. Merchandise inspired by the character has been produced.

Puss in Boots is inspired by the title character of the fairy tale with the same name. 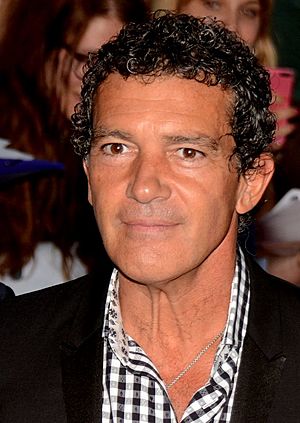 Antonio Banderas (pictured above) voiced Puss in Boots in the English, Spanish, and Italian dubs of the Shrek franchise.

Antonio Banderas voiced Puss in the Shrek franchise. Banderas said that his initial motivation to voice Puss was that he enjoyed the movie Shrek (2001). According to the actor, he was chosen for the role of Puss because of his Spanish accent.

Critical reception of Puss has been well liked, with reviewers praising him in the movies and describing him as "cute", "suave", "lovable", "charismatic", "feisty", "engaging", "legendary", "an instant charmer", "a natural-born star", "a notorious adventurer", the "suavest of swashbuckling cats", and "the world's greatest feline swordfighter". He was also regarded as "smooth-talking", "heroic", "honorable", self-confident, "passionate", loyal, with "humble" origins. Collider's Christina Radish described Puss as "charming and unforgettable", adding that he "was a cat destined for great things". Radish said that Puss getting his own movie was no surprise, commenting that the character has a "tremendous heart", and is a "much-loved fighter". Fantasy Magazine's Andrew Penn Romine called Puss "equal parts rogue and hero", but Stephen Holden of The New York Times described the character as "this vain, spoiled, swashbuckler". According to Holden, Puss is not "as clear-cut a personality [in Puss in Boots] as he was" in the Shrek movies. IndieLondon's Rob Carnevale called him a "cheeky feline swashbuckler" and Puss in Boots's "enigmatic central character". Todd McCarthy of The Hollywood Reporter described Puss as a "dashing little kitty centerstage", "ever-bold", and "a self-deprecating, sometimes bumbling but ultimately dashing swordsman". McCarthy enjoyed Puss's "vigorous physicality" in Puss in Boots. Neil Genzlinger of The New York Times called Puss "endearing", "dashing and fearless but also a tad reckless". IGN's Andy Patrizio enjoyed Puss in Shrek 2, and Scott Collura of the same website said that Puss "remains dignified and cool" in Shrek Forever After despite his weight gain. The character has been regarded as a source of comic relief.

All content from Kiddle encyclopedia articles (including the article images and facts) can be freely used under Attribution-ShareAlike license, unless stated otherwise. Cite this article:
Puss in Boots (Shrek) Facts for Kids. Kiddle Encyclopedia.