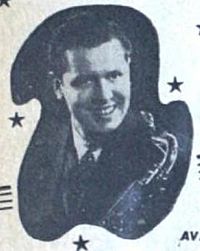 Gilbert in a 1945 magazine cover

In 2017 Gilbert was honored by the Guinness Book of World Records for having the longest career as a game show announcer for a single show, after 32 years with Jeopardy.

All content from Kiddle encyclopedia articles (including the article images and facts) can be freely used under Attribution-ShareAlike license, unless stated otherwise. Cite this article:
Johnny Gilbert Facts for Kids. Kiddle Encyclopedia.