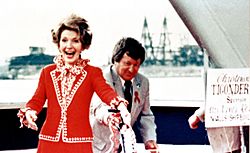 To sponsor something is to support an event, activity, person, or organization. The support can be with money or giving something else useful, such as advertising, or time. A sponsor is the individual or group that gives the support, similar to a benefactor. A sponsor may also be a personal sponsor, a political sponsor or a state sponsor. There are many different kinds of sponsors.

A sponsor is one (usually a company) who gives cash, goods or services in return for promoting the sponsor's company. There is a distinct difference between sponsorship and philanthropy. A sponsor expects a return on investment (ROI), usually in the form of advertising. A philanthropist donates something as a charitable contribution. In sports, sponsors compete to advertise in the most popular sports. In India, sponsors all want to be associated with Cricket. It is much harder to find sponsors for other sports. 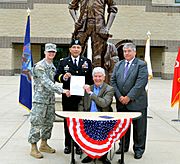 A sponsor or patron, usually a legislator, is someone who presents a bill or resolution for consideration. Others who join the sponsor are known as cosponsors or copatrons. In the United States Congress a sponsor is the first person listed among the lawmakers who introduce a bill to either the Senate or the House of Representatives. The process is very similar to sponsoring a bill in Parliament.

This is someone who agrees to help another person or persons, and be responsible for them. For example, an employer may sponsor a foreign national to become a permanent resident of the United States by guaranteeing that person a job. Sponsorship can also mean an individual who helps an organization. Many charitable organizations offer personal sponsorship of a boy or girl to help them. Many public radio and television stations ask for sponsors to provide funds for them to operate. At a Ceremonial ship launching the person breaking the champagne bottle over the ship's bow is called the sponsor of that ship. In many religions, godparents are the baptized child's sponsors.

Sponsorship is not always for the purposes of doing good. A state (or government) may sponsor terrorism for their own purposes. While not engaging in activities against another country (or countries) themselves, they may sponsor other groups to do it for them. The United States currently lists four countries who sponsor terrorism. They are: Cuba, Iran, Sudan, and Syria. State sponsors may also be called affiliates and/or supporters.

All content from Kiddle encyclopedia articles (including the article images and facts) can be freely used under Attribution-ShareAlike license, unless stated otherwise. Cite this article:
Sponsor Facts for Kids. Kiddle Encyclopedia.