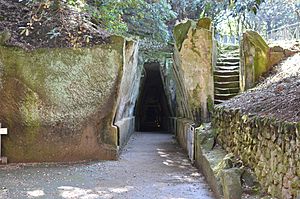 The cave was thought to be the seat of the Cumean Sybyl.

Cumae was a Greek settlement in Italy. It was settled in 740 BC, and is the first Greek colony on the Italian mainland. The same group had founded Pithekoussai, on the island of Ischia, in 770 BC. Later they founded other cities, namely Dikaiarcheia (modern-day Pozzuoli, and Neapolis (Naples).

All content from Kiddle encyclopedia articles (including the article images and facts) can be freely used under Attribution-ShareAlike license, unless stated otherwise. Cite this article:
Cumae Facts for Kids. Kiddle Encyclopedia.