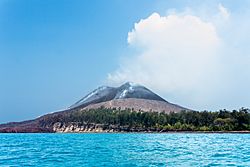 The Anak Krakatoa (Child of Krakatoa) or Anak Krakatau is a small volcanic island in the Sunda Strait. It is between the island of Java and Sumatra. Mount Anak Krakatoa is a leftover piece of Mount Krakatoa, which erupted in 1883. After the eruption of Krakatoa, new volcanic activity began on the bottom of the ocean along the same line as the previous volcanoes. In early 1928, a new volcano grew until its top came above the water. By 1930 it had become a small island. The volcano has been active sporadically since that time. The volcano has continued to grow to an elevation of about 1,000 feet (300 metres) above the sea. It has became famous because it erupted in 2018, causing a tsunami that killed many people and damaged buildings and property.

All content from Kiddle encyclopedia articles (including the article images and facts) can be freely used under Attribution-ShareAlike license, unless stated otherwise. Cite this article:
Anak Krakatoa Facts for Kids. Kiddle Encyclopedia.