On 22 December 2018, a tsunami that followed an eruption and collapse of the Anak Krakatau volcano in the Sunda Strait struck coastal regions of Banten Province (Java) and Lampung Province (Sumatra), Indonesia. At least 430 people were killed and 1,459 were injured. The tsunami was caused by an undersea landslide that followed an eruption of Anak Krakatau, the "Child of Krakatoa". On December 23 it was found that much of the Island of Anak Krakatau had collapsed into the sea. 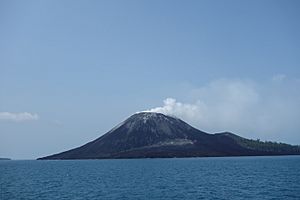 Lying on the Ring of Fire, Indonesia experiences a high frequency of earthquakes and is home to 127 active volcanoes. One of these volcanoes is Anak Krakatau (literally "child of Krakatau"), an active volcano in the Sunda Strait which emerged in 1927 following the 1883 eruption of Krakatoa – one of the most violent eruptions in recorded history which killed more than 36,000 people, many of whom lived in the same regions the 2018 tsunami struck, through huge tsunamis and ashfall.

In the months leading up to the tsunami, Anak Krakatau had seen increased activity, with an eruption on 21 December lasting more than two minutes and producing an ash cloud 400 metres (1,300 ft) high.

A catastrophic tsunami in 2004 happened around the same time of year, occurring on 26 December, but causing more widespread damage throughout the rim of the Indian Ocean, with countries as far afield as Thailand and Sri Lanka being affected.

The Meteorology, Climatology, and Geophysical Agency (BMKG) detected a tsunami event around 21:27 local time (14:27 UTC) at the western coast of Banten, but the agency had not detected any preceding tectonic events. The Indonesian National Agency for Disaster Countermeasure (BNPB) spokesman Sutopo Purwo Nugroho said "Dozens of buildings were destroyed by the wave, which hit beaches in Lampung and Banten about 21:30 local time (14:30 UTC) on Saturday". According to The Jakarta Post, authorities said the tsunami "may have been triggered by an abnormal tidal surge due to a full moon and an underwater landslide following the eruption of Anak Krakatau". According to The Guardian, "the tsunami is believed to have been caused by undersea landslides that followed an eruption of the Anak Krakatau volcano".

Previously, BMKG had issued a high wave warning for the waters surrounding the strait. Tide gauge for the tsunami measured around 90 centimetres (35 in) in Serang and 30 centimetres (12 in) in Lampung, on top of the two-metre (6 ft 7 in) high tides. While Indonesia possessed a tsunami warning system for tsunamis caused by earthquakes, there were none in place for volcanic tsunamis, and hence there were no early warnings. On 23 December, it was confirmed via satellite data and helicopter footage that the southwest sector of the volcano had collapsed, which triggered the tsunami, and the main conduit was erupting from underwater producing Surtseyan-style activity. 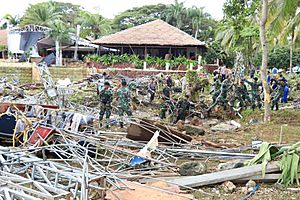 The Indonesian National Board for Disaster Management (BNPB) initially reported 20 deaths and 165 injuries. By the following day, the figure had been revised to 43 deaths – 33 in Pandeglang, seven in South Lampung, and three in Serang Regencies, with 584 injured, and two missing; most of the injuries recorded (491) also occurred in Pandeglang. The areas of Pandeglang Regency struck by the wave included beaches which are popular tourist destinations, such as Tanjung Lesung. The death toll was further updated to 62 with 20 missing persons later that day. Missing persons were also reported from small islands which are part of Pandeglang Regency. By 13:00 local time on 23 December, BNPB had confirmed 168 fatalities and 745 injuries with 30 having been reported as missing, and the figure was further increased to 281 dead and 1,016 injured. On 24 December, the reported death toll rose to 430, with 1459 reported injured and at least 150 missing.

Among the victims were Aa Jimmy, an Indonesian actor and comedian, and several members of the Indonesian band Seventeen: Bassist M. Awal "Bani" Purbani, guitarist Herman Sikumbang, road manager Oki Wijaya, and crewmember Ujang. After a few hours, drummer Windu Andi Darmawan and Dylan Sahara were reported to have been found dead. A video circulated online showing the band's stage being struck by the tsunami in the middle of their show at Tanjung Lesung, causing it to collapse and the audience to flee. Tour groups from state owned company PLN and the Sports and Youth Ministry were also affected by the tsunami, with some of the members dead, missing or injured.

Around 400 houses in Pandeglang located near the coast collapsed or were heavily damaged due to the wave, in addition to nine hotels. Thirty other houses in South Lampung were also heavily damaged. The road connecting Serang and Pandeglang was cut off.

All content from Kiddle encyclopedia articles (including the article images and facts) can be freely used under Attribution-ShareAlike license, unless stated otherwise. Cite this article:
2018 Sunda Strait tsunami Facts for Kids. Kiddle Encyclopedia.