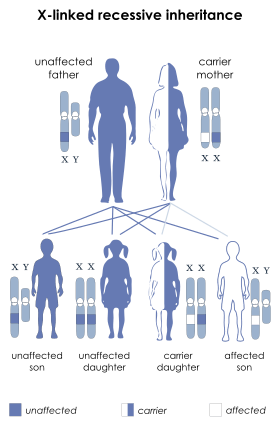 Haemophilia is a blood condition that means bleeding does not stop. The bleeding occurs because the blood does not clot. People with hemophilia lack proteins in the blood that make scabs and blood clots. A person with a small cut or internal bleed (bruise) could bleed to death. They do not bleed more than a normal person, but they bleed for much longer. The word comes from the Greek words haima ("blood") and philia ("to love"). To treat this, an affected person can get a blood donation from someone without hemophilia. The donor’s blood has the clotting proteins and can temporarily make a normal scab. 30% of hemophilia A and B cases are the first person in their family to have hemophilia which is the result of an unexpected mutation (this means that there is an unexpected change in the body).

It usually affects males. It is passed from mother to child through genes.

There are 3 types of haemophilia:

Genetic defects on the X chromosome affect males because they have only one X chromosome. In females, a recessive gene is usually masked by a normal gene on the other X chromosome. The Y chromosome does carry some genes, but far fewer than the X chromosome. Defects of this type are called "sex-linked" in genetics. There is no cure for this disease but there are different treatments available around the world.

All content from Kiddle encyclopedia articles (including the article images and facts) can be freely used under Attribution-ShareAlike license, unless stated otherwise. Cite this article:
Haemophilia Facts for Kids. Kiddle Encyclopedia.