Białowieża Forest is an ancient woodland. It is on the border between Poland and Belarus. It is 70 km (43 mi) north of Brest (Belarus) and 62 km (39 mi) southeast of Białystok (Poland). It is one of the last and largest remaining parts of the large primeval forest that once went across the European Plain.

This UNESCO World Heritage Site and Biosphere Reserve are in parts of the Brest Voblast and Hrodna Voblast in Belarus. On the Polish side they are near the town of Białowieża in the Podlaskie Voivodeship. Białowieża means the White Tower in Polish.

The border between the two countries runs through the forest. There is a border crossing for hikers and cyclists. The forest is home to 800 wisent, the continent's heaviest land animals.

On the Belarusian side the Biosphere Reserve is 1,771 km2 (684 sq mi). The National Park and World Heritage Site are 876 km2 (338 sq mi). The Belavezhskaya Pushcha headquarters at Kamieniuki, Belarus has a laboratory and a zoo. The zoo has wisent, konik (a semi-wild horse), wild boar, moose, and other animals. There is also a small museum, restaurant, snack bar and hotel. Because of the lack of facilities and having few tourists in the country, few foreign tourists visit the Belarusian Pushcha each year. 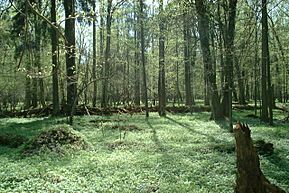 On the Polish side, part of the Białowieża Forest is protected as the Białowieża National Park (Białowieski Park Narodowy). It has a general area of about 100 km2 (39 sq mi). There is also the Białowieża Glade (Polana Białowieska). This has several buildings first owned by the tsars of Russia. The tsars were the last private owners of the forest (from 1888 to 1917) when the whole forest was in the Russian Empire. A hotel, restaurant and parking areas are there. Guided tours into the strictly controlled areas of the park can be arranged on foot or by horse-drawn carriage. About 200,000 tourists visit the Polish part of the forest each year. Activities are: bird watching with local ornithologist, watching bisons in their natural environment, and sledge and carriage rides with a bonfire. The popular village of Białowieża is in the forest. 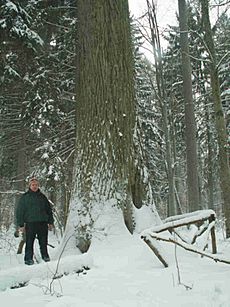 The King of Nieznanowo oak

The forest has a number of large, ancient pedunculate oaks (Quercus robur), some of which are individually named. Trunk circumferences are measured at breast height, 130 cm (51 in) above the ground. 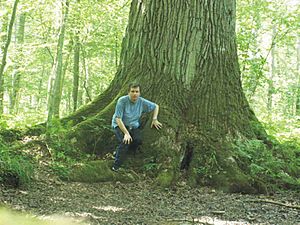 Emperor of the South oak

Polish environmentalists say that logging is threatening the flora and fauna in the forest, including species of rare birds. Poland's state forestry board is saying that it is being done for protection and for ecological reasons.

All content from Kiddle encyclopedia articles (including the article images and facts) can be freely used under Attribution-ShareAlike license, unless stated otherwise. Cite this article:
Białowieża Forest Facts for Kids. Kiddle Encyclopedia.