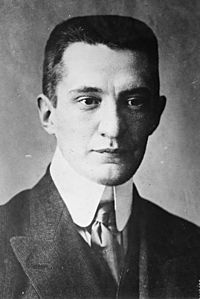 Alexander Kerensky (4 May 1881 – 11 June 1970) was a major political leader before and during the Russian Revolution. Kerensky served as the Second Prime Minister of the Russian Provisional Government until it was overthrown by the Bolsheviks under Vladimir Lenin in the October Revolution. He spent the rest of his life in exile. He died in New York City in 1970 at the age of 89.

All content from Kiddle encyclopedia articles (including the article images and facts) can be freely used under Attribution-ShareAlike license, unless stated otherwise. Cite this article:
Alexander Kerensky Facts for Kids. Kiddle Encyclopedia.