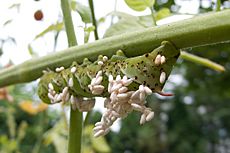 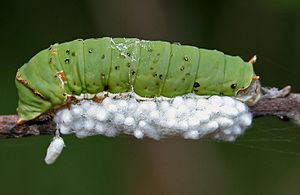 The Braconidae are a family of parasitoid wasps. They are one of the richest families of insects: there are between 50,000 and 150,000 species worldwide. The species are grouped into 45 subfamilies and about 1,000 genera.

Most braconids are parasitoids (both external and internal) on other insects. Their victims are the larvae of Coleoptera, Diptera, and Lepidoptera, and also some hemimetabolous insects such as aphids and bugs.

Most species kill their hosts, though some cause the hosts to become sterile and less active. The endoparasitoid species lay their eggs inside the victim. They have elaborate adaptations which improve larval survival inside the host. They have endosymbiotic viruses which disable the host immune defences. These polydnaviruses are often used by the wasps instead of a venom cocktail.

The DNA of the wasp actually has bits which are the templates for the viral particles. A study suggested these arrangements had started about 100 million years ago.

These viruses suppress the larva's immune system and allow the parasitoid to grow inside the host undetected. Through the evolutionary history of being used by the wasps, these viruses apparently have become so modified, they appear unlike any other known viruses today. Because of this highly modified system of host immunosuppression, a high level of parasitoid-host specificity is not surprising. In other words, the viruses need to be a bit different for every host species.

Parasitism on adult insects (particularly on Hemiptera and Coleoptera) also happens. Members of two subfamilies are known to form galls on plants.

All content from Kiddle encyclopedia articles (including the article images and facts) can be freely used under Attribution-ShareAlike license, unless stated otherwise. Cite this article:
Braconid Facts for Kids. Kiddle Encyclopedia.