Montage Mountain is a ski area in Pennsylvania, located 8 miles (13 km) from downtown Scranton, Pennsylvania. It is located about 125 miles (201 km) northwest of Philadelphia and New York City. There are 26 trails, two terrain parks, and one of Pennsylvania's longest snow tubing areas. The mountain has a summit elevation of 1,960 feet (600 m) and a vertical drop of 1,000 feet (300 m).

From 1984 to 1991, Montage Mountain was owned and run by Montage, Inc, a non-profit corporation. The ski area was developed with a blend of public and private money. Public funding was provided by federal economic development funds and a county bond. In 1979, the land was purchased from Pennsylvania Gas & Water Co. for $14 million (equivalent to $41 million in 2018). Construction began in January 1984 and was completed in time for the grand opening in December.

In 2006, Lackawanna County sold the ski area to Sno Mountain, LP, a Philadelphia-based investment group, for $5.1 million. The ski area was renamed Snö Mountain. Sno Mountain, LP filed a Chapter 11 petition for bankruptcy in 2012, claiming upwards of $24 million in debt. National Penn Bank purchased the property at auction for $4.6 million in March 2013. The original name, Montage Mountain, was restored in May 2013 when the area was sold to real estate company Jefferson-Werner for $5.1 million. 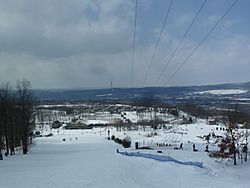 View from the mountain

Montage Mountain has 24 ski and snowboard trails, including White Lightning, the 2nd steepest trail in the Eastern United States. It has a mid-mountain lodge with a patio and grill. Above the lodge are beginner and intermediate slopes. Below the lodge are advanced and expert slopes. This advanced area is locally known as North Face; it features the steepest skiing in Pennsylvania. Montage Mountain has two terrain parks with jumps, rails, and features ranging from beginner to expert. Montage also has a gladed ski trail.

The trail difficulty breakdown is:

There is also a snow tubing area.

All content from Kiddle encyclopedia articles (including the article images and facts) can be freely used under Attribution-ShareAlike license, unless stated otherwise. Cite this article:
Montage Mountain Ski Resort Facts for Kids. Kiddle Encyclopedia.