Blue Mountain Resort is a ski resort located near Palmerton, Pennsylvania, on Blue Mountain in the northern part of the Lehigh Valley, in Pennsylvania. Blue Mountain serves the Allentown, Philadelphia, New York City, and Wilmington urban areas, as well as Carbon County, Schuylkill County, and the Hazleton area.

The resort was opened by Ray Tuthill in 1977 as Little Gap Ski Area; he re-established it as Blue Mountain in 1989. With a new logo needed for the new name, Tuthill asked people from across the nation to submit ideas. The final selection of the characteristic skier in the word "mountain", was created by local designer, Carol Stickles. The resort celebrated its 30th anniversary during the 2007-08 season.

In 2002 and 2003 Blue Mountain added two advanced runs and a teaching hill with two beginner slopes, fed by a triple chairlift and a conveyor lift. In 2006 the resort added eastern Pennsylvania's first high-speed six-pack chairlift.

In summer 2008 the resort implemented a $3.1 million upgrade for the 2008-2009 ski season. It included improvements to the resort's snowmaking equipment, a newly built dining facility, and the addition of a new intermediate trail between Razor's Edge and Paradise named Dreamweaver.

In 2009 Blue Mountain became the first PA ski resort and second resort in the country to have a BigAirBAG which can be used to practice aerial maneuvers. As of the 2016-17 ski season the bigairbag is no longer in use. Blue Mountain added another PA ski resort first in 2011. They have partnered up with the United States Luge Association and will now be a US Luge Training and Recruitment site. Blue will have the only east coast Natural US luge track open to the public.

Blue Mountain has a summit elevation of 1,407 feet (429 m) and a vertical drop of 1,087 ft (331 m), the biggest vertical drop of any ski resort in Pennsylvania. The summit is accessed by a high-speed quad, a six-person lift, or three double chairs. A beginner trail and an intermediate trail run down the outer, eastern side of the north-facing slope. Four expert runs follow the chairlifts to the bottom, and an access trail connects the summit to the western half of the resort. 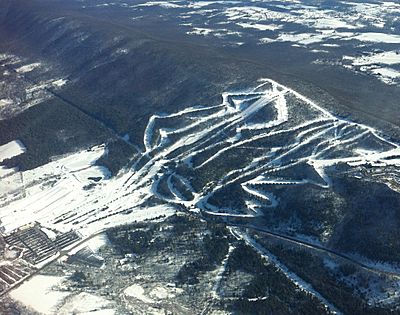 Three double chairlifts rise up the western side of the resort, accessing mixed novice, intermediate, and expert terrain. The main resort lodge, located at the top of the mountain, is accessible by road. A dedicated beginner section adjacent to the lodge is served by a double chair and one surface lift. A beginner trail, Burma Road, connects to the beginner section at the bottom of the hill. A second lodge and the resort's snow tubing facility are also located at the bottom of the mountain near the Valley Lodge.

The resort has a total of 39 slopes. Blue Mountain has glade trails, beginner through expert, various terrain park installations, and training slopes. Blue Mountain uses RFID ticket scanners at every lift. The mountain offers 39 snow tubing trails, each over 1,000 feet (300 m) long. They are the only mountain in PA that offers family-size tubes as well as single tubes, with both day and night snow tubing.

There are five terrain parks, which include Terrain Run, Lower Sidewinder, Come Around Park, and Central Park. The longest trail is 6,400 feet (2,000 m) in length; the mountain has 164 acres (0.3 sq mi; 0.7 km2) of skiable terrain. Although it receives an average of only 33 inches (840 mm) of natural snowfall per year, natural snow is supplemented with 100% snowmaking coverage.

The resort hosts an alpine ski race team consisting of more than 125 USSA competitors and 75 developmental competitors. Its ski patrol is featured in the reality series Ski Patrol. which aired on truTV in the 2008-2009 season. 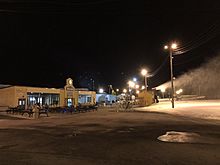 Valley Lodge at night with snow making machines on

According to the A. W. Kuchler U.S. potential natural vegetation types, Blue Mountain Ski Resort would have a dominant vegetation type of Appalachian Oak (104) with a dominant vegetation form of Eastern Hardwood Forest (23). The plant hardiness zone is 6a with an average annual extreme minimum air temperature of −7.0 °F (−21.7 °C). The spring bloom typically begins around April 22nd and fall color usually peaks before October 20th.

All content from Kiddle encyclopedia articles (including the article images and facts) can be freely used under Attribution-ShareAlike license, unless stated otherwise. Cite this article:
Blue Mountain Resort Facts for Kids. Kiddle Encyclopedia.