Old Forge is a borough in Lackawanna County, Pennsylvania, United States. The population was 8,313 at the 2010 census. It is located approximately 2 miles from Scranton and 9 miles from Wilkes-Barre.

The history of Old Forge can be traced back to 1789 by Dr. William Smith, who was an army surgeon in the American Revolutionary War. During the 1820s, Charles Drake operated the only stagecoach inn between Wilkes-Barre and Carbondale. Drake's son, Ebenezer, secured a post office for Old Forge in 1848, where he served as postmaster until 1885. On May 26, 1871, Old Forge Township was designated, as it previously had been part of Lackawanna Township. Old Forge Borough was incorporated on May 2, 1899.

During the early part of the twentieth century, the borough's main industry was anthracite coal mining along with a minor silk throwing industry. During the 1920s, the Dutchess Underwear Company came to Old Forge where many residents worked until the 1950s, when the company relocated to Georgia. It was during this time that the borough's population reached an all-time high of over 14,000 residents. As a result of a major coal mining strike, many people left Old Forge and the population dropped to 12,661 according to the 1930 census.

The 1930s brought a new industry to the borough in that of textiles. This was an important addition to the industry of Old Forge during World War II. By the 1950s, the Maxson Corporation began operating its electronics factory, at one point employing as many as 1,000. The Knox Mine Disaster on January 22, 1959 virtually put an end to all anthracite coal mining in the area.

The 1960s saw the Butler Silk Mill and the Maxson Corp. close. The Gabriel Sporting Goods Company moved into a portion of the Maxson plant. Brooks Manufacturing was the major employer in town during this time. By the 1970s, though, Brooks was undergoing a major reduction in workforce and eventually closed in the 1980s to be replaced by its current tenant, King Coil Mattress Co.

The 1960s and 1970s saw the growth of what has become the borough's trademark, the pizza business. The origins of selling pizza are believed to be rooted within the Ghigiarelli family, when Mrs. Ghigiarelli used to serve her homemade pizza to coal miners who gathered to play cards. This led to what is known as "Old Forge Pizza." This pizza is typically rectangular in shape with a balanced sauce, and topped with a blend of cheeses - usually mozzarella and white American or mozzarella and mild cheddar - on a crispy thick crust. Old Forge style pizza is served at many restaurants in Northeastern Pennsylvania and as far away as Michigan, Florida, and Colorado. 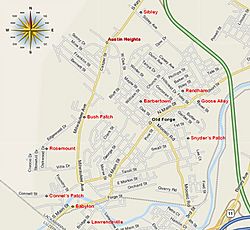 There are many sections of Old Forge named in the early years of the borough, which still are referenced to today.

There were 3,734 households, out of which 22.8% had children under the age of 18 living with them, 46% were married couples living together, 11.1% had a female householder with no husband present, and 39% were non-families. 33.4% of all households were made up of individuals, and 15.7% had someone living alone who was 65 years of age or older. The average household size was 2.23 and the average family size was 2.85.

The ancestry of Old Forge varies among many heritages, with Italian being the most dominant with 41.3% of the population claiming Italian heritage, which ranks as the 6th highest percentage of Italians of any community in the U.S. according to the 2010 U.S. Census.

The climate of Old Forge is classified as humid continental. The town generally has hot and humid summers. Old Forge's warmest month (on average) is July at 87 °F (29 °C) and the coldest month (on average) being January at 34 °F (1 °C). Old Forge occasionally has some severe weather, mostly thunderstorms and flooding. Winters bring snow, with some years bringing low amounts of snow to others with several feet of snow caused by Nor'easters. One of the more notable nor'easters to hit Old Forge was the Blizzard of 1993 when Old Forge received approximately 21" of snow from that storm. Winter also brings the more dangerous ice, sleet, and freezing rain, which has caused several traffic accidents over the years. Tropical storms and hurricanes occasionally survive up the coast of the Atlantic Ocean and cross into Pennsylvania

All content from Kiddle encyclopedia articles (including the article images and facts) can be freely used under Attribution-ShareAlike license, unless stated otherwise. Cite this article:
Old Forge, Lackawanna County, Pennsylvania Facts for Kids. Kiddle Encyclopedia.