Starlight is a village in Buckingham Township, Wayne County, Pennsylvania. Crosstown Highway, which is entirely concurrent with Pennsylvania Route 370 (PA-370), is generally thought to be the southern edge of the village. It was once a depot of the Scranton Division of the New York, Ontario & Western (O&W) Railway, but today, when it is known outside its immediate vicinity, it is largely for being home to the Inn at Starlight Lake & Restaurant, which has been open since 1909. 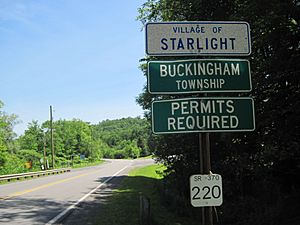 An image of Starlight's PennDOT sign, looking northeast along Crosstown Highway. The sign for Buckingham Township is also visible.

A Pennsylvania Department of Transportation (PennDOT) sign on Crosstown Highway identifies the community as the "Village of Starlight." In Pennsylvania, a village is an unincorporated community within a township, but PennDOT identifies most villages with roadside signs, a fact that might reasonably lead those unfamiliar with this practice to believe that these communities are incorporated municipalities administered separately from the townships in which they are located. Since Pennsylvania's villages, including Starlight, are, in fact, not municipalities in their own right, they do not have official boundaries, and the United States Census Bureau does not collect statistics for them (unless, unlike Starlight, they are census-designated places). In spite of this, because of strong local consensus, as well as the fact that many features are named for the villages they are associated with, it is almost always impossible to consistently determine whether a particular feature is in one village or another.

Shehawken Creek (once called Chehocton Creek) and Starlight Lake are located in Starlight. The latter is the source of the former.

All content from Kiddle encyclopedia articles (including the article images and facts) can be freely used under Attribution-ShareAlike license, unless stated otherwise. Cite this article:
Starlight, Pennsylvania Facts for Kids. Kiddle Encyclopedia.