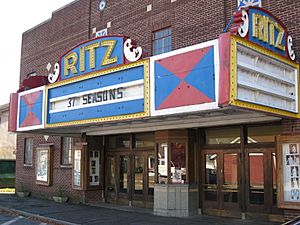 The Ritz Theater in Hawley, PA 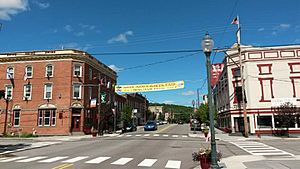 Hawley is a borough on the Lackawaxen River in Wayne County, Pennsylvania. The borough's population was 1,211 at the time of the 2010 United States Census.

The borough was named for Irad Hawley, first president of the Pennsylvania Coal Company. Early industry centered on the transportation and support of nearby coal mining operations along with manufacturing facilities. The Bellemonte Silk Mill, regarded as the largest bluestone building in the world, and J.S. O'Connor American Rich Cut Glassware Factory are listed on the National Register of Historic Places.

Hawley is home to a number of notable lakes, golf courses, and other recreational facilities, making it a leisure destination, particularly during the summer months. Local attractions include:

There were 549 households, out of which 23.5% had children under the age of 18 living with them, 32.8% were married couples living together, 15.5% had a female householder with no husband present, and 45.9% were non-families. 39.7% of all households were made up of individuals, and 18.2% had someone living alone who was 65 years of age or older. The average household size was 2.21 and the average family size was 2.97. 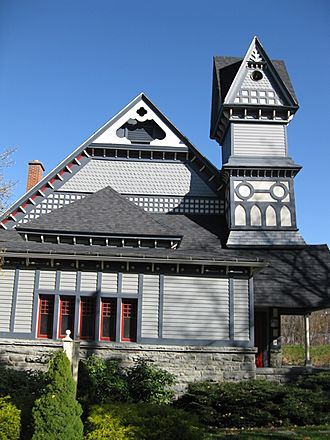 All content from Kiddle encyclopedia articles (including the article images and facts) can be freely used under Attribution-ShareAlike license, unless stated otherwise. Cite this article:
Hawley, Pennsylvania Facts for Kids. Kiddle Encyclopedia.