Flag of Wyoming facts for kids

The flag of the state of Wyoming consists of the silhouette of an American bison. The red symbolizes the Native Americans and the blood of pioneers who gave their lives. The white is a symbol of purity and uprightness. The blue is the color of the skies and distant mountains. It is also a symbol of fidelity, justice and virility. The bison represents the local fauna, while the seal on it suggests the custom of branding livestock. 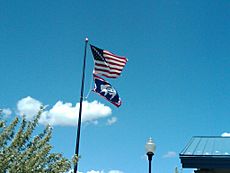 State of Wyoming flag flying under the United States flag.

In 1916 the Wyoming Daughters of the American Revolution (DAR) ran a contest inviting the public to submit possible designs for a Wyoming flag. A prize of $20 was offered to the winner, and the DAR received a total of 37 entries. They chose a drawing by Verna Keays, a recent graduate of the Art Institute of Chicago. On January 31, 1917, Governor Robert D. Carey signed the state flag bill into law and the bison flag was officially adopted.

DAR regent Grace Raymond Hebard, a professor at the University of Wyoming and noted suffragist and scholar, contributed suggestions for changes after the design had been accepted. In Keays' original design, the one approved by Wyoming's legislature, the bison faces toward the fly, symbolizing its former freedom to roam the plains of Wyoming. Hebard thought that if the bison were to face toward the hoist, the design would be more balanced (animals generally face the hoist on flags, as they would the wind). In the end, all Wyoming flags from the first batch produced onward showed the bison facing the hoist, although this change was never officially adopted by the Wyoming legislature.

In 2001, a survey conducted by the North American Vexillological Association (NAVA) placed Wyoming's flag 23rd in design quality out of the 72 Canadian provincial, U.S. state, and U.S. territory flags ranked.

All content from Kiddle encyclopedia articles (including the article images and facts) can be freely used under Attribution-ShareAlike license, unless stated otherwise. Cite this article:
Flag of Wyoming Facts for Kids. Kiddle Encyclopedia.