Populus deltoides, the eastern cottonwood or necklace poplar, is a cottonwood poplar native to North America, growing throughout the eastern, central, and southwestern United States as well as the southern Canadian prairies, the southernmost part of eastern Canada, and northeastern Mexico.

Populus deltoides is a large tree growing to 20–60 m (66–197 ft) tall and with a trunk up to 2.8 m (9 ft 2 in) diameter, one of the largest North American hardwood trees. The bark is silvery-white, smooth or lightly fissured when young, becoming dark gray and deeply fissured on old trees. 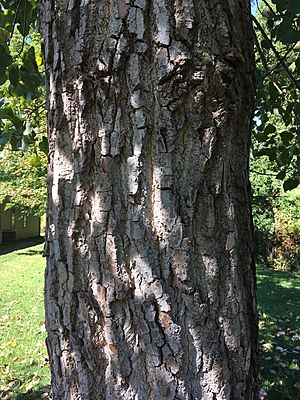 Bark of a mature tree

The twigs are grayish-yellow and stout, with large triangular leaf scars. The winter buds are slender, pointed, 1–2 cm (0.39–0.79 in) long, yellowish brown, and resinous. It is one of the fastest growing trees in North America. In Mississippi River bottoms, height growth of 10–15 ft (3–5 m) per year for a few years has been seen. Sustained height growth of 1.5-meter (5 ft) height growth and 2.5-centimeter (1 in) diameter growth per year for 25 years is common.

Eastern cottonwood's range is centered in the Midwestern US. It is not common in the Northeast and is reported only in scattered occurrences, which may constitute intentional plantings rather than natural ones.

The leaves are large, deltoid (triangular), 4–10 cm (1.6–3.9 in) long and 4–11 cm (1.6–4.3 in) broad with a truncated (flattened) base and a petiole 3–12 cm (1.2–4.7 in) long. The leaf is very coarsely toothed, the teeth are curved and gland tipped, and the petiole is flat; they are dark green in the summer and turn yellow in the fall (but many cottonwoods in dry locations drop their leaves early from the combination of drought and leaf rust, making their fall color dull or absent). Due to the flat stem of the leaf, the leaf has the tendency to shake from even the slightest breeze. This is one of the identifying characteristics.

The species is divided into three subspecies or up to five varieties. The subspecies classification is as follows:

It needs bare soil and full sun for successful germination and establishment; in natural conditions, it usually grows near rivers, with mud banks left after floods providing ideal conditions for seedling germination; human soil cultivation has allowed it to increase its range away from such habitats.

Unlike related species such as quaking aspen, it does not propagate through clonal colonies, but will resprout readily when cut down.

The leaves serve as food for caterpillars of various Lepidoptera.

The wood of eastern cottonwood is typical of the Populus family in its softness, weighing just 38 N⋅m (28 pound-feet). It is utilized for things like plywood and interior parts of furniture.

General Custer fed his horses and mules the bark during the 1868–69 winter campaign against Native American tribes south of Arkansas. According to Charles Goodnight, cowboys afflicted with gastric disorders would make an astringent tea from the inner bark. 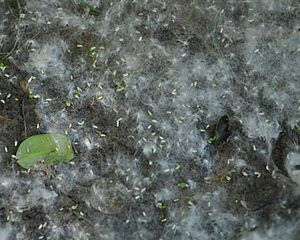 Seeds and seed hairs from an eastern cottonwood

Eastern cottonwoods typically live 70–100 years, but they have the potential to live 200-400 years in ideal conditions.

The Balmville Tree (cut in 2015) was the oldest eastern cottonwood in the United States.

All content from Kiddle encyclopedia articles (including the article images and facts) can be freely used under Attribution-ShareAlike license, unless stated otherwise. Cite this article:
Populus deltoides Facts for Kids. Kiddle Encyclopedia.