Beatrice ( bee-AT-rəss) is a city in and the county seat of Gage County, Nebraska. The population was 12,459 at the 2010 census. Beatrice is located 40 miles (64 km) south of Lincoln on the Big Blue River. It is surrounded by agricultural country.

Gage County was one of the 19 counties originally established by the Nebraska Territorial Legislature in 1854. At the time of its establishment, there were no settlers living within it.

In 1857, the steamboat Hannibal, carrying 300 passengers up the Missouri River from St. Louis, Missouri to Nebraska City, Nebraska, ran aground near Kansas City, Missouri. While it was stranded, 35 of the passengers agreed to form the "Nebraska Association", under which name they would unite in seeking a townsite and establishing a settlement in the territory.

After reaching Nebraska City, the Association divided itself into two exploratory parties, one of which went directly westward and the other southwest. The latter party located the site of Beatrice, at the point where the DeRoin Trail crossed the Big Blue River; and the whole Association decided to settle there. The settlement was named after Julia Beatrice Kinney, the 17-year-old daughter of Judge John F. Kinney, a member of the Association.

The Territorial Legislature selected Beatrice as the county seat of Gage County in 1857. The decision was challenged by Blue Springs, but was confirmed by the Legislature in 1859. In 1864, the Legislature dissolved the original Clay County (not the current Clay County, Nebraska), dividing its land between Gage and Lancaster Counties. The addition of this ground in the north placed Beatrice near the center of the enlarged county, strengthening its claim to the county seat. It continues to hold that position today.

In 1862, the U.S. Congress passed the Homestead Act, which allowed settlers to claim 160 acres (65 ha) of government land for a nominal fee. The law went into effect on January 1, 1863. Just after midnight on that day, Daniel Freeman persuaded a clerk to open the local Land Office so that he could file a claim for a homestead located 4 miles (6 km) west of Beatrice. His is regarded as the first of the 417 applications filed that day.

In 1936, Congress created Homestead National Monument of America on the site of Freeman's claim.

The Big Blue River was both a help and a hindrance to the development of Beatrice. It provided the town with a water source, and produced ample power to operate the mills that were among the town's first industries. However, it represented a major obstacle to travelers on the Oregon Trail route; and floods frequently destroyed the dams and bridges in the area. Not until 1890 was a Big Blue bridge built in Beatrice that could survive for decades.

In 1871, the Burlington and Missouri River Railroad constructed a line from Lincoln, Nebraska to Beatrice. In 1879, the Union Pacific Railroad built a line joining Beatrice to Marysville, Kansas. By 1890, the Chicago, Rock Island and Pacific Railroad had also run tracks through Beatrice.

In 1885, the Nebraska legislature enacted legislation to establish the Institution for Feeble Minded Youth near Beatrice, subject to the city's donating a suitable parcel of land. Beatrice donated 40 acres, located 2 miles (3 km) east of the city limits; and the first residents were admitted in 1887.

Over the following decades, the institution expanded greatly. By 1935, there were 1171 residents living on 519 acres (210 ha). The institution was largely self-supporting, operating a farm on which the residents did much of the work; in 1935, 346 acres (140 ha) were under cultivation.

In 1945, the institution was renamed the Beatrice State Home. Its resident population peaked at about 2300 in the late 1960s. From there it declined: new restrictions had been imposed on the use of unpaid labor by residents of institutions, and there was a national trend toward deinstitutionalization. In 1975, the Horacek v. Exon lawsuit was settled with a consent decree whereunder many of the residents of the Beatrice State Home were transferred to community-based mental health facilities. In that year, the institution's name was changed to the current Beatrice State Developmental Center.

A 2006 investigation by the federal Centers for Medicare and Medicaid Services revealed a number of severe deficiencies at the Center; after two years of appeals, the Center lost its Medicaid certification in 2009.

As of 2011, the Center served about 175 clients. The majority had been diagnosed with "severe" or "profound" retardation; nearly all suffered from two or more other disabling conditions. 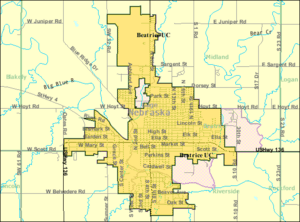 There were 5,509 households of which 27.6% had children under the age of 18 living with them, 44.9% were married couples living together, 10.7% had a female householder with no husband present, 4.2% had a male householder with no wife present, and 40.2% were non-families. 34.5% of all households were made up of individuals and 16.5% had someone living alone who was 65 years of age or older. The average household size was 2.23 and the average family size was 2.82.

There were 5,395 households out of which 28.2% had children under the age of 18 living with them, 49.8% were married couples living together, 8.7% had a female householder with no husband present, and 38.8% were non-families. 33.9% of all households were made up of individuals and 17.7% had someone living alone who was 65 years of age or older. The average household size was 2.24 and the average family size was 2.87.

Beatrice is the setting for The Gallows, a 2015 found footage movie that was co-written, co-directed and co-produced by Chris Lofing, a graduate of Beatrice High School.

A popular story was circulated about a near-miss that occurred in Beatrice, when, at 7:25 pm on March 1, 1950, a church exploded five minutes after the scheduled choir practice, but no one was injured because all fifteen members were late. Snopes.com identified this as a true event.

All content from Kiddle encyclopedia articles (including the article images and facts) can be freely used under Attribution-ShareAlike license, unless stated otherwise. Cite this article:
Beatrice, Nebraska Facts for Kids. Kiddle Encyclopedia.