Kids Encyclopedia Facts
This page is about the pass over the Sierra Madre Range in south-central Wyoming. For the nearby railroad (Bridgers Pass) and Interstate 80 summits about 16 miles NNE of Bridger Pass, see Great Divide Basin. For other uses, see Bridger Trail.

Bridger Pass is a mountain pass in Carbon County, Wyoming on the Continental Divide of the Americas near the south Great Divide Basin bifurcation point, i.e., the point at which the divide appears to split and envelop the basin.

The first documented crossing of Bridger Pass was by the Stansbury Expedition, returning east from an expedition to Utah and guided by Jim Bridger. A decade later the pass was in regular use by travelers on the Overland Trail and the associated stage line, these having been established along the route described by Stansbury and known since that time as the Cherokee Trail. To support the stage line, the Bridger Stage Station was established near the pass. The Overland Trail was used steadily between 1860 and 1869 until the First Transcontinental Railroad made the stage line obsolete.

In modern times, the official route of the Continental Divide Trail uses Bridger Pass Road to Navigate the Great Divide Basin between Battle Pass on Wyoming Highway 70 to Rawlins, Wyoming. A challenge to hikers is the lack of potable water along this section due to the brackish nature (salinity) of water in the basin. 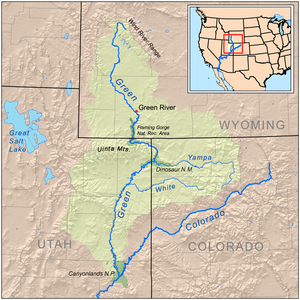 Bridger Pass is on the Continental Divide on the eastern edge of the Green River watershed. The river itself is more than 100 miles west of the pass.

All content from Kiddle encyclopedia articles (including the article images and facts) can be freely used under Attribution-ShareAlike license, unless stated otherwise. Cite this article:
Bridger Pass Facts for Kids. Kiddle Encyclopedia.