Sturtevant is a village in Racine County, Wisconsin, United States. The population was 6,970 at the 2010 census.

Sturtevant was originally known as Parkersville, after the Parker family, early settlers in the area. Other former names for Sturtevant are Western Union Junction and Corliss. The name Corliss referred to the Brown Corliss Engine Company of Milwaukee. The name Sturtevant was selected in 1923, when the B. F. Sturtevant company relocated to the village from Massachusetts.

According to the United States Census Bureau, the village has a total area of 4.19 square miles (10.85 km2), all of it land. 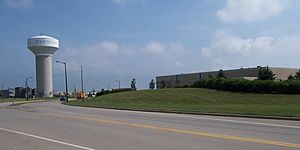 There were 2,103 households, of which 32.2% had children under the age of 18 living with them, 47.1% were married couples living together, 12.2% had a female householder with no husband present, 6.0% had a male householder with no wife present, and 34.7% were non-families. 28.2% of all households were made up of individuals, and 10% had someone living alone who was 65 years of age or older. The average household size was 2.44 and the average family size was 2.99.

Sturtevant was a junction between two main lines of the Chicago, Milwaukee, St. Paul and Pacific Railroad, better known as the Milwaukee Road. The Chicago & Milwaukee (C&M) line ran north–south and the Racine & Southwestern Line (Southwestern Line) ran east–west. In 1985 the Canadian Pacific Railway, through its subsidiary Soo Line, acquired the Milwaukee Road and continued operation over these tracks. Service on the former Southwestern Line goes west only as far as Kansasville. Amtrak also passes through Sturtevant, serving Racine, Kenosha and the southern Milwaukee suburbs from a station on Wisconsin Highway 20 to the north.

Sturtevant is served by the Sylvania Airport (C89).

The 300-bed Sturtevant Transitional Faciity (STF), designed to provide offender reintegration to the community and accountability for offenders, provides Alternatives to Revocation (ATR), Work Release, and Community Service programs, and acts as a holding facility, similar to a county jail. STF has two security levels, minimum and maximum, with a 150-bed capacity each.

All content from Kiddle encyclopedia articles (including the article images and facts) can be freely used under Attribution-ShareAlike license, unless stated otherwise. Cite this article:
Sturtevant, Wisconsin Facts for Kids. Kiddle Encyclopedia.