Jaromír Jágr (born 15 February 1972) is a Czech professional ice hockey right winger who is currently playing for HC Kladno in the 1st Czech Republic Hockey League, while under contract to the Calgary Flames of the National Hockey League.

He has played in the NHL with the Pittsburgh Penguins, Washington Capitals, New York Rangers, Philadelphia Flyers, Dallas Stars, Boston Bruins, New Jersey Devils, Florida Panthers, and the Flames, serving as captain of the Penguins and the Rangers. After leaving the Rangers in 2008, he played three seasons in the Kontinental Hockey League (KHL) with Avangard Omsk. However, he returned to the NHL in 2011 with the Flyers, and remained in the league for seven more years before being assigned by the Flames in 2018 to HC Kladno, which he owns.

Jágr was the Czech Republic's flag bearer at the 2010 Winter Olympics. He is a member of Czech Ice Hockey Hall of Fame. 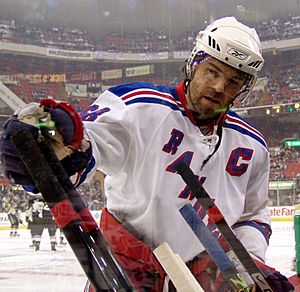 Jágr with the Rangers in the 2008 playoffs

Jágr began skating at the age of three, and he immediately showed exceptional abilities. At the age of 15, he was playing at the highest level of competition in Czechoslovakia for HC Kladno, and when he was 17, he became the youngest member of the Czechoslovak national team.

Jágr was the fifth overall selection in the 1990 NHL Entry Draft. He won consecutive Stanley Cups in the 1991 and 1992 seasons with the Penguins. Individually, he has won the Art Ross Trophy as the NHL scoring champion five times (four times in a row), the Lester B. Pearson Award for the NHL's outstanding player as voted by the NHL Players' Association (NHLPA) three times and the Hart Memorial Trophy as the League's most valuable player once, while finishing second four times. 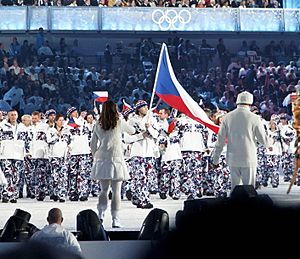 Jágr resides in the Czech Republic during the off-season. His father, also named Jaromír Jágr, owns a chain of hotels. Jágr wears the number 68, which he has worn through his entire career, in honour of the Prague Spring that occurred in Czechoslovakia in 1968 and his grandfather. In any interviews when asked about his number Jágr explains that he wears it not due to bad relations with Russian people, but rather due to disaffection with Communism.

Jágr's longevity in the NHL has spawned a fan club known as "The Traveling Jagrs", a group of hockey fans from the Alberta cities of Calgary and Camrose who share interest in the player. The group dresses in the sweater, hockey socks and pant shells of eleven of Jágr's teams (his nine NHL teams, the NHL All-Star Team, and the Czech national team) plus long black wigs in reference to Jágr's traditional look. Usually the club would travel once or twice a year to see him play in person, but with Jágr signing with the Flames they announced they would be a more regular fixture at games.

All content from Kiddle encyclopedia articles (including the article images and facts) can be freely used under Attribution-ShareAlike license, unless stated otherwise. Cite this article:
Jaromír Jágr Facts for Kids. Kiddle Encyclopedia.