Jari Pekka Kurri (born May 18, 1960) is a retired Finnish professional ice hockey right winger and a five-time Stanley Cup champion. He was inducted into the Hockey Hall of Fame in 2001. In 2017 Kurri was named one of the '100 Greatest NHL Players' in history. He is currently the general manager of Jokerit. 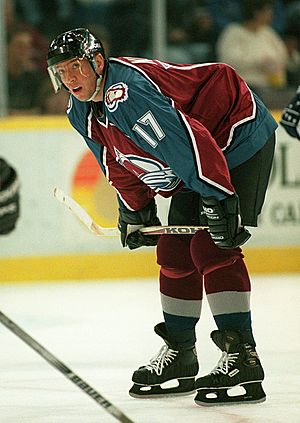 Kurri with the Avalanche in 1997

Kurri started his ice hockey career in the junior team of Jokerit. Already in age of 17 he played in Jokerit team adults. He also played for Finnish Junior National Team in 1978, 1979, and 1980, and in Finland team in Olympics 1980.

In 1980 he was invited to play for Edmonton Oilers in Canada. There he played with Wayne Gretzky for 8 seasons until Gretzky moved to Los Angeles. They became famous. Oilers won Stanley Cup 1984, 1985, 1987, 1988 and 1990. Later Kurri played for Los Angeles Kings, New York Rangers, Mighty Ducks of Anaheim and Colorado Avalanche.

During his career Kurri made 600 goals in NHL. Because Kurri was most years continuing his NHL term in North America in Stanley Cup playoffs, he could not play for Finland National team very often. However he was in Olympic Games in Nagano 1998, and got a bronze medal.

Kurri finished his career as the highest scoring European-born-and-trained player in NHL history, with 601 goals, 797 assists, and 1,398 points. 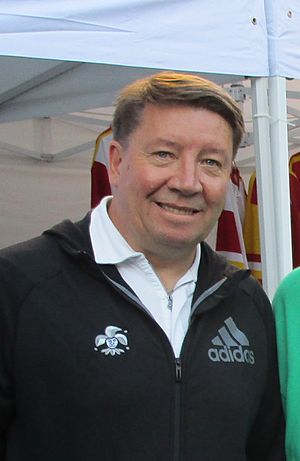 After being long time general manager of the Finnish national men's ice hockey team, scouting players and assisting the head coach. He is now GM of the first Finnish KHL league team Jokerit.

In 2000, he was named along with longtime line-mate Gretzky to the International Ice Hockey Federation Hall of Fame. In 1998, he was ranked number 50 on The Hockey News' list of the 100 Greatest Hockey Players, the highest-ranking Northern European player (1998). In addition, he was the first Finn to be inducted into the Hockey Hall of Fame, doing so in 2001.

Kurri is married to former Miss Finland, Vanessa Kurri, nee Forsman; they wed in 2004 and have three daughters. Kurri also has twin boys from his first marriage.

All content from Kiddle encyclopedia articles (including the article images and facts) can be freely used under Attribution-ShareAlike license, unless stated otherwise. Cite this article:
Jari Kurri Facts for Kids. Kiddle Encyclopedia.