Joseph Steven "Joe" Sakic (born July 7, 1969) is a Canadian professional ice hockey executive and former player. He played his entire 21-year National Hockey League (NHL) career with the Quebec Nordiques/Colorado Avalanche franchise. Named captain of the team in 1992 (after serving as a co-captain in 1990–91), Sakic is regarded as one of the most capable team leaders in league history and was able to motivate his team to play at a winning level.

Sakic led the Avalanche to Stanley Cup titles in 1996 and 2001, being named the most valuable player of the 1996 playoffs, and honored as the MVP of the NHL in 2001 by the hockey writers and his fellow players. As such, he is one of six Avalanche players in franchise history to participate in both of the team's Stanley Cup victories. Sakic was also named to play in 13 NHL All-Star Games and selected to the NHL First All-Star Team at centre three times.

Over the course of his career, Sakic was one of the most productive forwards in the game. His wrist shot, considered one of the best in the NHL, was the source of much of his production as goalies around the league feared this shot. During the 2002 Winter Olympics, Sakic helped lead Team Canada to its first ice hockey gold medal in 50 years, and was voted as the tournament's most valuable player. He represented the team in six other international competitions, including the 1998 and 2006 Winter Olympics. 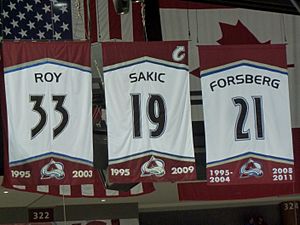 On April 11, 2013, Sakic and 11 others were inducted into the Canada Sports Hall of Fame. He served as executive adviser and alternate governor for the Avalanche, effective at the end of the 2010–11 season, and promoted to Executive Vice President of hockey operations on May 10, 2013. In 2017, Sakic was named one of the '100 Greatest NHL Players' in history. 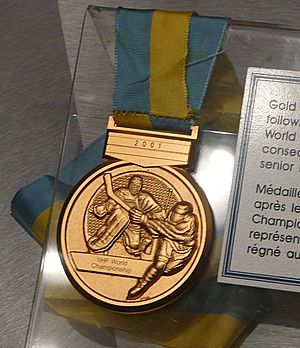 Example of the Gold Medal for World Championships, where Canada won its first gold medal in the tournament 1994

Sakic and his wife have three children. They met at a local high school while he was playing in Swift Current, and they frequently return to the town during the off-season. Sakic is an avid golfer, and competed in the celebrity Pro Am golf tournament in Lake Tahoe in the summer of 2006. Each summer, he also hosts his own charity golf tournament which benefits the Food Bank of the Rockies. His charity work, which is estimated to have provided more than seven million meals to poor children and families, has earned an NHL Foundation Player Award in 2007.

Sakic was a fan favourite in his hometown of Burnaby, where a street has been named Joe Sakic Way in his honour. Throughout British Columbia, he is affectionately known as "Burnaby Joe"; in Colorado, he is known simply as "Super Joe." His younger brother Brian joined the Swift Current Broncos during Joe's final season with the team, and later played for the Flint Generals of the United Hockey League. Sakic also has an uncredited role in the movie Happy Gilmore as a "player at hockey tryouts".

All content from Kiddle encyclopedia articles (including the article images and facts) can be freely used under Attribution-ShareAlike license, unless stated otherwise. Cite this article:
Joe Sakic Facts for Kids. Kiddle Encyclopedia.