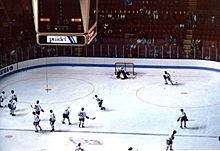 The Quebec Nordiques warming up before a game in 1986

The Quebec Nordiques (French: Nordiques de Québec, pronounced [nɔʀˈd͡zɪk] in Quebec French, how to say: /nɔrˈdiːks/ in Canadian English, meaning "Northmen" or "Northerners") were a professional ice hockey team from Quebec City, Quebec, Canada. The Nordiques played in the World Hockey Association (1972–1979) and the National Hockey League (1979–1995). The team moved to Denver, Colorado in 1995 and changed their name to the Colorado Avalanche.

All content from Kiddle encyclopedia articles (including the article images and facts) can be freely used under Attribution-ShareAlike license, unless stated otherwise. Cite this article:
Quebec Nordiques Facts for Kids. Kiddle Encyclopedia.